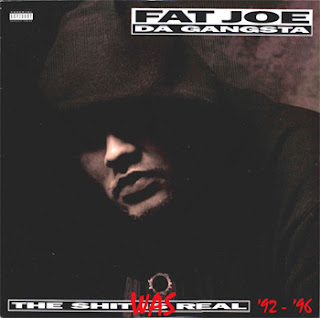 Remember Fat Joe Da Gangsta, the latino rapper from the Bronx who repped Diggin' In The Crates and dissed commercial bullshit in the name of real hip hop? In 2011 with radio designed collaborations with everyone from Paris Hilton to Lil' Wayne on the resumé it's easy to forget that was how it all started for Don Cartagena as a youngin back in the early '90s. I can't hate too much on Joey tho since it has become clear that he's in this game for the money but at least he always sprinkles a few hot tracks on (almost) all of his albums, but I haven't bought one of his albums since "Loyalty" in 2002 and I doubt I ever will again. I'm still looking out for whatever little "gift" to his early fans he throws out there every now and then.

As you've surely noticed I'm giving alot of space for the D.I.T.C. crew on this blog, and will continue to do so, as they represent the type of hip hop music I like the best; true true school you could call it if you will. Although Fat Joe has strayed far from the original formula, there's no reason to deny that there was a time when he made alot of hot music and appeared on several heavy posse cuts and other ill cameos. This 18 tracks compilation features the majority of Fat Joe's non album material from 1993 to 1996 with the intro and outro dating back to '92. I think there was a R&B track from around '95 that I cut since it didn't fit with what I wanted to present and I also passed on Diamond D's "Pass That Shit" as you should have "Stunts, Blunts & Hip Hop" in your collection already. Thanks to AtlantisWasReal and TheBigSleep over @ The T.R.O.Y. Blog forum for helping me out a bit with ths one, much props guys!