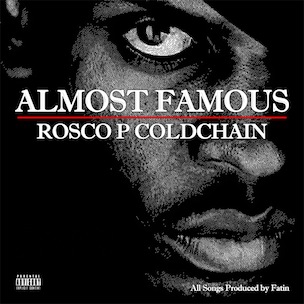 Rosco P. Coldchain is a street-centered rapper who's been lurking in the shadows of the industry for a lot longer than most would guess. He originally got his break as an affiliate of The Clipse, and was signed to The Neptunes' Star Trak Entertainment imprint, where he recorded the full-length album "Hazardous Life". The LP boosted production giants like DJ Premier and Neptunes but remains unreleased, and it seems it will stay that way. 2012, however, will see a debut release from the emcee, despite his current incarceration. The nine tracks collected on the release, titled "Almost Famous", are all produced by Fatin "10" Horton and were originally recorded between 2003 and 2007. Fatin, who produced suberb cuts for Pharoahe Monch, Skyzoo, Phonte and Torae, assures that they were "ahead of its time".

While we're waiting for the June 12 release, I want to bring back the two joints that introduced me to Rosco. I believe both of these songs were recorded for "Hazardous Life" sometime in the mid-2000s. Both tracks, which are produced by DJ Premier, are on some vintage hardcore boom bap shit, and has me fiending for the official debut album next month. Enjoy!

ROSCO P. COLDCHAIN - "WHUT'Z IT ALL ABOUT"
Posted by lost.tapes.claaa7@gmail.com at 3:06 AM