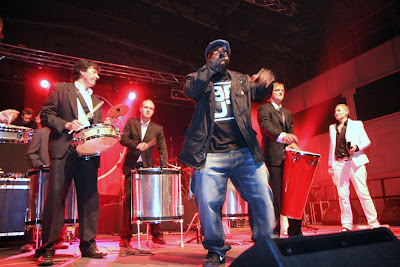 Last week I posted Part 1 of my interview with Oxygen from Soundsci and SPOX PhD. If you got the first reading down, follow us now as The Lost Tapes picks up the conversation with Ox right from where we left off last time. Enjoy y'all!

claaa7: The 7" single you released with SPOX-PhD was one of last year's finest singles. The way you held your own on a posse cut with Kurious, Sadat X and Diamond D was real proof of you being an emcee's emcee, so to speak. How did that collaboration go down and was what the session like?
Oxygen: Much respect. After a few faculty adjustments, we finally found the right balance of artists to feature on it. Spinna basically asked me who were some of the emcees I wanted to work with because he had an idea to do a posse track once we completed "Brilliance". So I started firing off names. In the end, he locked down Diamond D and Sadat X, and I reached out to Kurious through my man, Dave Dar. There was no actual session together, as many collaborations are done these days with all this technology. But I wish there WAS! I still listen to that track on a regular and just geek out. I don't think people realize how nice Kurious is as a writer. He was actually one of my 1st personal choices, and he came through like a guerrilla on that song. I'm happy with all the verses and how Spinna arranged everything. It's all like a dream come true for me. If I don't get to do another song in my life, I'm so pleased to have done that one.

c7: Continuing on the topic of SPOX-PhD, have you two been working on more material together since that debut single?

Ox: Yes, Spinna and I are just about done with our entire album.
'
c7: Wow! That's fantastic news; I can't wait to hear more from you two together.
Ox: Our follow-up single should be dropping within the next couple of months actually. Maybe sooner.
'
c7: You are also known for your involvement with the group Sputnik Brown, and the album and EP y'all released as limited digital downloads was truly loved amongst us true underground fans. What are the chances of a limited vinyl release or something like that for either, or both, of those?

Ox: Well we did release some of the songs with DWG (Diggers With Gratitude) on vinyl earlier this year called "That Brown Underground" EP. It would be nice to see an official release for the remaining material as they were, however I doubt very highly that it will happen.

c7: It's quite obvious that you put your crews first and foremost, but what are the chances that we'll eventually get to hear a full-blown solo album by Ox The Architect? And if so, what producers and guests would you like to work with for the project?

Ox: Well the SPOX PhD album is kind of a solo album, although I do have a couple of features from my Sputnik Brown family and my brother Wyld Bunch. I'll consider it my solo debut LP once it drops. I've been speaking with DJ Format (UK), Paul Nice and also Sam Sever for a while about some future endeavors with each of them. However, creatively, I've been trying to reload myself so I'm able to get in the proper zone to jump into those project. I've been impressed with the sound of quite a few heads lately. Confidence (of Rashad & Confidence) is incredible on the beats. Rashad is nice too. Wouldn't mind working with them on something. I like the style of that cat Jorun Bombay from Canada. And definitely J-Zone if I had to get beats from anyone. That's my dude, and his production is insane! My bucket list of emcees for features I would be here forever listing them. Seriously.

c7: From the official projects you have released so far, which is the one you feel most proud about and why?


Ox: Definitely the "Gone Diggin'" 45. First of all, the whole process of that song coming together was the first time I've experienced real-life magic! That whole entire song was written on location as Gensu Dean and I were diggin' in spots around NYC. Second, it was the first and only record that I've done so far where I was able to take part in every process of having it pressed, released, and sold. I have to give thanks to everybody that was involved in making that release what it is today. I'm very fortunate. I've had one person say to me it's the "Digger's National Anthem". Two years after its release, it still seems to be gaining momentum. The B-side track "Mastermind's In Effect" was from the first demo tape I had ever done with my man Cutwizard Albee. That 45 is the perfect balance of history and future for me.

c7: Considering that you hang around a lot of different talented producers, have you yourself dabbled anything in creating beats? I know you received a couple of co-production credits on, for example, DJ Spinna's "Sonic Smash" LP.

Ox: I used to mess with the machines way back when things were simpler. I remember my man Albee had the Korg DDD-1. After that, he showed me how to freak the Akai S01 and the Akai S1000. That was about the last thing I worked with. I produced a track in the mid '90s for my man Son Of Know-1 called "Bring It On Down" that I'm proud of. It was never released though. My thing was basically collecting the wax. I hear different beat ideas in my head all the time listening to stuff I score, but I've always just brought the vinyl or ideas to the experts and let them punch the buttons. That was the case with "Elemental" on the Sonic Smash album. A lot of the Sputnik Brown songs, the same thing. 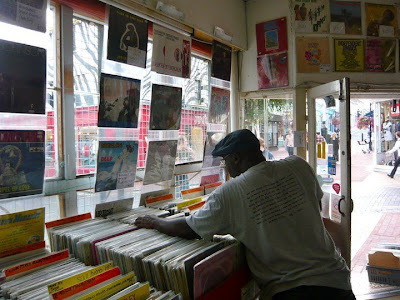 c7: What are your main inspirations as a writer and a lyricist?

Ox: Usually, just myself. I try not to listen to any other emcees while creating, with the exception of whoever I may be doing a track with. Then I'd have to say they inspire me as well. I try to keep an original flow on everything. The beat I'm given has a lot to do with it too. Most of the time, I won't write anything for a good while after I get a beat. I just let it loop over and over and over... and over, then after a while I start hearing myself inside of it.

c7: What music do you listen to when you find the time to just listen? Based on your music, I would imagine you're into a lot of different styles and genres?

Ox: Those Clear Soul Forces out of Detroit and Ab-Soul from Cali really have my attention right now. I love their energy. I listen to all types of music though. I like 80's synth pop and new wave, psych & prog rock, gospel, jazz, blues, sometimes classical or country, funk soul. All of it. I'm a big fan of Chicago and Billy Joel for the song writing and arrangements. Nina Simone gets heavy rotation. In my house, I grew up on gospel music. Not that "old time religion" stuff. I mean that funky stuff, like Bill Moss & The Celestials, Inez Andrews, Myrna Summers, Mighty Clouds Of Joy, and Gabriel Hardeman Delegation.

Ox: It's cool. I'm finding my place in it, so no complaints here.

c7: I know you're still building your brand as a musician, but are you and your various crews currently doing any major shows? Do you think there's any chances for a European tour in the near future?

Ox: Nothing concrete lined up yet, but in the meantime I'll just keep dropping releases until the interest is there. I would love to hit the road with Soundsci in the near future. I think that wouldbe ridiculously fun!

c7: We touched a bit on it already during this interview, but I still want to ask you what's next in line for Oxygen as far as musical endeavors goes. We are a lot that are eagerly anticipating new music from you, that's for sure!

Ox: Thanks brother. Man, to be honest I would love to finally learn how to play this trumpet I bought. haha I scored a used trumpet from a local second hand shop, and I try to slip some practice in whenever I can. It's tough though. I think I'm going to have to trade up for a sax. As far as releases go, there's plenty on deck. I don't want to start name dropping since I don't know actual release dates for many, but I've been busy. Trust me!

c7: I wish you all the best of luck with all those future projects, and once again many thanks for the patience to do this interview!

Ox: Thank YOU for all that you're doing, and for allowing me the platform to do this interview. This life's journey of mine has been an amazing one so far. I'm looking forward to the future as well. Much respect to everyone who took time out to read this too. You are appreciated. Peace.

Those words concludes this interview which I sincerely hope all you readers have found as interesting as I myself did. If you still haven't grabbed Ox's latest release, the highly recommended "Formula 99" LP with Soundsci, make sure to check it out and show your support @ Soundsci's Bandcamp page. Much respect to Ox for the thorough answers and just being an extremely humble and talented artist. I also want to give a shout out to my man Jaz for the initial hook up with Oxygen, which by extension made this interview possible.
Posted by lost.tapes.claaa7@gmail.com at 12:19 PM