[Comp] SUNZ OF MAN - "NOTHING NEW UNDER SUN" 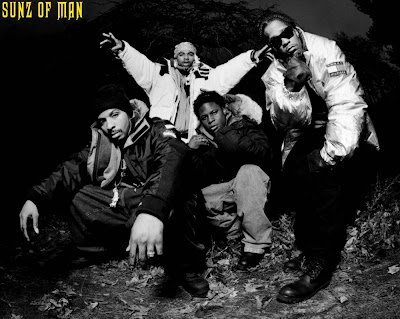 Even if you're only remotely into The Wu-Tang Clan and their many affilliates, the name Sunz Of Man should ring a bell. Not where they only one of the absolute first of the Killa Beez (not to mention best) to get the chance to release a few 12" singles of their own to test the waters. These proved Sunz was the breeding ground for some of the finest lyricists in rap's history, including Killah Priest, Hell Razah, Prodigal Sunn and the joker of the deck, 60 Second Assassin. They constantly made music that forced you to think and/or take a stance; each respective emcees style really clicked with the next and their ear for beats were always on point throughout the 1990s. The result was a four man crew (originally six, then five) that should have made a lot higher numbers than they did.

With their singles run between 1995 and 1996 that featured dark classics like "Soldiers Of Darkness" / "5 Arch Angels", and "No Love Without Hate", they separated themeselves from their peers through mixing the dark, rugged beats that you'll expect from murder music, but instead injectimg vast amounts of knowledge. Despite the underground popularity of those singles (some which even garnered a very small amount of MTV play), it wouldn't be until 1998 that Sunz Of Man's official debut LP landed on store shelves; "The Last Shall Be First". Featuring production by The RZA, True Master, 4th Disciple and Supreme, and cameos from Raekwon, U-God, ODB, Method Man, Wyclef and even Earth, Wind & Fire, the album was a great lisen, though it could be argued that it lacked the agressiveness and punch of those early aforementioned singles.


But even before that, they easily had enough material to fill up several albums. There's been rumours for years about a debut album called "Nothing New Under the Sun", which I recently learned was never completed. But the music that they recorded in the mid-'90s around the same time they dropped those first timeless singles, and had hooked up with The RZA and 4th Disciple, easily surpass what actually became the official debut album. The four man group (Shabazz The Disciple lett the group when they signed to Wu-Tang Records) stayed busy in the studio, and the rumours for an album somehow formed; those who read The Source back in the mid-'90s might remember ads for a Sunz Of Man debut album called "Nothing New Under The Sun", featuring the previously released singles. This was at the very height of The Wu-Tang's success, during releases of such timeless classics like "Return of the 36 Chambers", "Cuban Linx" and "Liquid Swords", and the only Killa Beez to strike a deal beside Shyheim The Rugged Child (who was somewhere in between a Wu-Tang affiliate and dito GP Wu at the time). RZA had started his own Wu-Tang Records imprint at this point, and Sunz Of Man's  "Soldiers Of Darkness" was its first signee; meaning that "Nothign New..." or whatever they would've choosed to call it could've been the first release on the label had they decided to release it in 1996. I haven't heard much why the label didn't push more for a group album from this quartet, as they had much of the Wu-Tang sound they were known for at that time, and Priority Records wasn't exactly known to boycott hardcore hip-hop. Maybe it was the heavy knowledge that scared them off. After all, all major record labels strive to make sure that the population are kept dumb, deaf and blind, which is the exact reason that we see people like Cheef Keef and Lil' Boosie getting record deals and extreme promotion backings; but that's a whole other discussion for another day.

Wu-International's Reccolectah pointed me to their Prodigal Sunn interview where he said that it was really only loose joints that was recorded, and that "Nothing New Under the Sun" as an actual LP never existed or was planned. That however didn't stop me when I decided that we needed to hear at least some type of an album of this classic material that Sunz recorded around 1994 to 1996. Through extensive research, a lot of time and thought, and the use of my ears to determine production- and vocal styles found on the extensive gang of tracks pre-"The Last..." that I had collected throughout the years. I was determined to put together a full-length "album" that I believe come as close as possible represent what we would have heard in 1996, had Sunz Of Man debuted then instead. To my ears, these 18 tracks came out as an absolutely terrific set, resulting in that you might find the '98 retail album a little bleak in comparision the next time you give it a spin.

It should be noted that I've loved "The Last Shall..." since I first popped in the disc when it dropped, and still does. The earlier '95 sessions are many times a completely different animal altogether though; filled with moody and dark soundscapes, chaotic strings, haunting female vocals, off key piano lines all tied together by the rugged boom-bap drums. Together these elements create a fantastic canvas for the four emcees to paint vivid picture of ghetto struggles, 5% knowledge, righteous living, cinematic stories and so on. Something that will please Killah Priest fans is that he's heard on damn near every song here, as opposed to the official debut album where he only kicked five verses in total. I believe the majority of these 18 tracks were recorded between 1993 and 1996, and is mainly produced by Supreme (Kourt) and 4th Disciple; with some additional input by Y-Kim, RZA, Allah Mathematics and possibly True Master.
Speaking on RZA, you'll notice that both "Can I See You?" and "Inmates to the Fire" appears here again, despite them being tracks on "The Last...". The reason being that those songs were recorded way back in '95, and although they had to re-record the verses when they found the original reels during the making of the official Red Ant album, the sound fit perfectly with the other tracks in the set. Below you'll find Hell Razah's own words on these particular two songs, from this great interview on "Last Shall Be First" :

"Inmates to the Fire - This was done at RZAs house, where we also did "Soldiers of Darkness." We had done this around the same time they were doing Rae's album. We had done another song called "As It Was Written" that didn't make the album. Those two songs were on the same reel. We couldnt find the beat because of everything RZA lost in the flood in the studio. It was through the will of God that we found it. We had to redo the vocals over and all sorts of crazy shit. Killah Priest was on the original song. He was recording "Heavy Mental" when we were recording some of these songs, so we couldnt get a hold of him.

"Can I See You - This is another vintage "Five Arch Angels" record from those days. RZA did this beat. It wasnt supposed to be on the album. 4th was in the studio and everyone thought he did that beat, but it was RZA actually. 4th came to the studio with Berretta 9 from Killarmy. He kicked his verse and Prodigal wanted him to get on the shit, so we threw Berretta 9 on there and did Sunz of Man/Killarmy collaboration. This song got such a response."

Just from this little excerpt, three songs are confirmed as having been recorded during those same sessions (including the RZA produced "As It Was Written"). "Soldiers Of Darkness", "Five Arch Angels", "Bloody Choices" and "No Love Without Hate" were all singles released on Wu-Tang Recors in the mid-'90s. "Mics Of Insanity" is the only Y-Kim/Sunz collabo ever released, and make claim for its name."Wicked Ways" could have been for the album; it was at least recorded during the same sessions, considering it's a 4th Dissciple production and later in the year used for the compilation "One Million Strong". In fact most of the tracks here, I have noticed through my research that almost every song here have, in some capacity, been said to be songs from the recording sessions post-Wu-Tang Records signing. And listening to it, there's really nothing that stick out in a bad way or sound out of place to me. Of course, the sequencing are all courtesy of me, to make it sound like an actual album rather than some thrown together songs, and from the eighteen songs included there are more than enough heat to carry you through the entire "album". With that being said, I think this is one of my best album-like compilations so far, and a must hear for any Sunz Of Man and mid-'90s Wu-Tang Clan fanatics. There's also a bootleg/mixtape that's been circulating for some time, bearing the same title, but bearing little to no resemblance to these early sessions heard on the download below.  Grab it, enjoy and TURN IT THE FUCK UP!!! 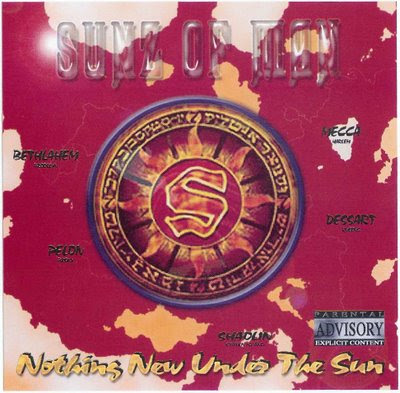 SUNZ OF MAN - "NOTHING NEW UNDER THE SUN"
Posted by lost.tapes.claaa7@gmail.com at 8:22 AM