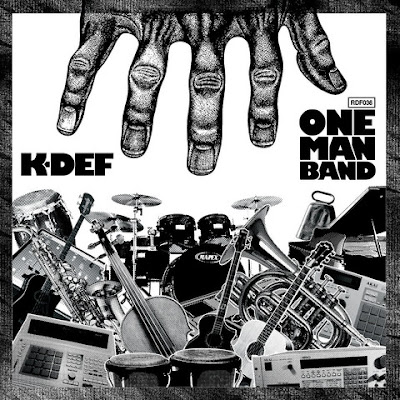 As far as vinyl releases goes, K-Def's first real official solo album with Redinition Records is here. The "Nightshift" project from last year clocked in at just over 20 minutes and were eight songs strong on the LP set though the CD edition also featured four additional cuts (also available on two separate 7" releases from the NJ producer). Despite "One Man Band" being a longer and somewhat more compelte release, it's safe to say that if you liked what 'Def accomplished on his recent EP:s and 7" singles with Redefinition Records. This is more of the same superb instrumental journey music, though there's a few new tricks up the producer's sleeves here as well, as expected. If you're still not convinced after this review, you can stream the entire project via REDEF'S Bandcamp.

The Music:
Things kick off with the funk/jazz excursion that is "Funky Fridays" which is is absolutely brilliant both as an opener and on its own. It's eight miutes of 'Def at his finest, incorporating elements of mainly funk and jazz "samples", with strings, Rhodes, hypnoic rhythm patterns and what not. Clearly a great intro that sets the tone fot the rest of the album. This is followed by the short but equally powerful single "Dark Soul" where a haunting array of keyboard and synth samples sets the tone for what's to come with an addictive bassline and a strong 5/4 rhythm that takes stage to underline the simultaneous melodies. It works well. and already here it's clear that K-Def are aiming for a new sound than the raw hip-hop infused sound he brought us with the "Night Shift" EP.  Track three is a another funk driven exercise, with some slight hints of Rhodes, strings and even a flute sample, adding to the deep bassline. Once again, it works best in the context of a front-to-back listen to the album, though as with the previous tracks it will sound interesting as a stand-alone cut; though by all acounts it's a true album. But the many sound effects, varied instrumetation and funk, jazz and soul fusions constantly make it stand out. This is followed by one of he strongest cut on the entire LP, somewhat reminiscent of "Da Supa Heath" in that its an instrumental somber piano driven piece with a 3/4 rhythm, and that I get the feeling that I have heard the same sample somwehere else; but as K-Def totally replays everything it more creates a sense of deja vu, than an instant recognition. This could and should also be counted among his strengths since he ventured out as a solo artist!
The abovestated sense of deja vu can be heard in several parts of the album, most notably on "Soul Paper" where 'Def flips the piano melody made famous through Wu-Tang Clan's classic "C.R.E.A.M." to great effect. I mentioned once to JNOTA of Redef an idea about how K-Def could make a great album of his own own instrumental covers of classic hip-hop tracks ("Stakes is High", "Escapism", "One Love" on "Da Supa Heath", the two Ghost tracks from "Willie Boo Boo: The Fool" and now "C.R.E.AM."; yet, i'm probably missing some). What I love about these type of excursions is that they are not strictly rip-offs but rather uses the main elements of the well-known maserpieces flipped in a 100% K-Def way. The "Soul Paper" track, for instance, leaves the instantly recogizable piano sample but let it run for a longer time and over a completely new rhythm track. The same goes for the following track "New Jersey Dodger" where 'Def to great effect incorporates main elements of "Return Of The Crooklyn Dodgers" but with a whole lot of new instrumentation, sound effects and a new rhythm pattern that truly makes it stand on its own. As mentioned above, I would really love to see a full-length project or mini-album with K-Def taking on some of hip-hop's most classic tracks, and I still have hopes that this might  actually happen one day..

But just as much as the deja vu moments found here, you are left with amazement at all the brand new musical cues that runs through the majority of "One Man Band". I know peeps who have a hard time listening to instrumental hip-hop music, and when it comes to listening to straight instrumental versions of vocal cuts (such as flips of 12" singles) I partially agree with them, but for music that's specifically created for listening to them that way, like Def's album like "Nightshift", "Willie Boo Boo" and now "One Man Band", the music never gets stale as new musical cues are steadily added and replaces the vocalist to great effect! Unlike Dilla's "Donuts", you could probably use this as complex instrumentals to rhyme over but I'd much rather keep it in its full instrumental glory. One of the things that's different here from some of the artist's previous releases is that this is completely instrumental project, whereas for example"Night Shifft" had apperances from Rob-O and Raw Poetic between the instrumetals. In that sense it's more aching to 2006:s "Willie Boo Boo" , but it's clear as day that K-Def's way of creating instrumental LP:s has changed quite a bit over the six years since the former album was released; and to me this sounds like the more complete  record.
Rather than going in and describing every single song on the project, as I see this as an album that you not only could but should be listened to from front-to-back, and preferably in a good set of headphones, as it truly forms a musical journey, again putting 'Def as one of the 10 to 5 best producers to ever touch an MPC; now using a completely digital software where he replays all samples (which in itself is very hard to believe considering the professionality and pure hip-hop sound of the music). Clocking in at about 40 minutes with thirteen tracks, the project's length is just about right and the inclusion of the 7" only "Ghettoman's Hideout Theme" as a hidden bonus track on the vinyl really sounds right at home on this project. As mentionned above it should be noted that the CD version includes four bonus instrumentals not found anywhere else. Whether or not these actually will do much for the final project is left unsaid, but I have a feeling that if they did, they would have been an essential part of the LP and therefore included on the LP version as well.

Conclusion:
All in all, K-Def has done it again and if you're a fan of designed instrumental hip-hop albums, this is a really strong album that NEEDS to find a place in your crates or bookshelves if you're like me; an extremely big fan of K-Def and Redefinition Records. From the eight minutes openening journey that is "Freaky Friday", the other songs mentioned above, the jazz-saxophone based "Street Jazz" (which I feel have some of the trademarks of No ID's produciton on Common's "Communism"), the somber "Ghetto Grooves" with it's mesmerizing bassline, Rhodes and recurring melodic motif; the beautiful guitar- and uenexpted sound effects driven "K Commes Thru". Again, there's no need to go through every single song, because despite them standing on their own, it's when they are put together in this beautiful sequence that they really come to life.  I'm still waiting for my order to arrive, but I strongly recommend all readers of The Lost Tapes to support K-DEF and Redef by picking up the album which at the moment are available now in three formats: CD (with four bonus beats), and two 2xLP sets; one pressed on regular black vinyl, and one on lime green vinyl. Hurry up and order your copy from Redef ASAP, the shipping is fast whether you're in Europe or the States so *hurry up and buy*. Another excellent release from K-Def, and the next project from the producer is a full-length collaboration with Raw Poetic which sounds really promising based on the five songs I've heard so far. 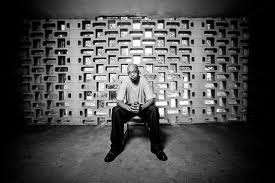 Posted by lost.tapes.claaa7@gmail.com at 4:28 AM