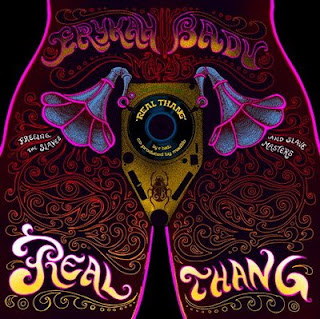 Erykah Badu is without a doubt the undisputed modern Queen of Soul music. There's plenty of more talented young signers like Angie Stone, Jill Scott and Mela Machinko, but Badu is on another level as she is always pushing boundaries and has changed up with each new relase, and to gret effect to. To me she is up almost like a modern day Billie Holiday or Aretha Franklin. She's got a lot of love for hip-hop, often collaborating with producers and session musicians like Jay Dee, Madlib, ?uestlove & James Poyser, Karieem Riggins, Sa-Ra, Ta'raach, Rashad Smith, Bilal, Lil' Wayne and Common to name a few. On top of that she's got an incredible discography, with albums I strongly recommend any of y'all to pick up. It's hard to pick a favorite (though "Worldwide Underground" is easily her least fully realized project), but together with The Soulquarian's backed "Mama's Gun" I'd have to say my favorite proejct(s) of her is the two part album "New Amerykah Part One" and "Part 2". Between the two albums these saw Badu collaborate with Madlib on no less than four tracks, each bonafide classics ("The Healer", "My People", "Incense", "Umm Hmm").

Recently I came across a 2007 promo single for "New Amerykah Pt. 1" that I had previously missed out on, The two songs on the 12" single were both produced by Madlib. What's intersting is that the A-side "Real Thang" never made it to the album (save for a UK version where it appeared as a bonus track between "Telephone" and "Honey"). It's another slamming Madlib/Badu joint that would have fitted it perfectly on the LP so it's really a shame it didn't make the project, which either way happens to be one of the best releases of 2008. The single also include a nice remix by long-time Badu collaborator Rashad Smith who has plenty of hits under his belt dating back to the early days of Bad Boy. I will most likely hook up a Badu compilation sooner or later, she's just too good and has enough dope material that never appeared on an album so I think it should be appreciated. But for now, I uploaded the Madlib and Rashad Smith mixes of "Real Thang" as well as "The Healer" remix featuring Pharoahe Monch, although only the original version appeared on the "Real Thang" CD-single. Still, "The Healer" is probably my favorite 'Lib/Badu collaboration so far along with the dreamy "Incense"and with a slamming verse by P. Monch you know this is a must hear!