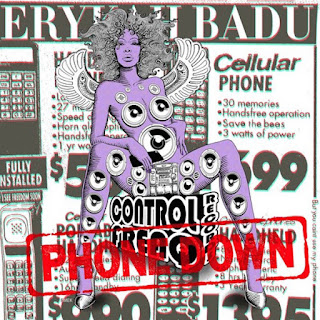 I've been absolutely feinding for new original material solo material by Erykah Badu since the brilliant two-punch of her "New Amerykah" albums had begun to sink in, the last being in 2010. To this day, Badu hasn't released a solo album that does not border between a 4/5 to 5/5 rating so naturally the recent announcement of a brand new mixtape "You Can't Use My Phone" which will drop on the Thanksgiving weekend. So far two singles has been released from the project - the just released original track called "Phone Down" as well as her take on Drake's "Hotline Bling", a 7 minute excursion into laid back grooves and infectious lyrics called the "But U Can't Use My Phone Mix". Check out both tracks below and stay tuned for the full mixtape to drop.