With the tragic passing of one of hip-hop's legendary punchline kings and rhyming sports enthusiasts music fans all over the world has been grieving since the news of Malik Taylor's passing hit the internet last week. Taylor was a man of many names, but to most people he was known as Phife Dawg from the group that perhaps was THE epitome of '90s Hip Hop, A Tribe Called Quest. I can't think of any other MC that elevated himself from a rather mediocre spitter (in my honest opinon) on "People's Instinctive Travels..." to a quick, witted, well flowing, and unique wordsmith in just a little over a year. But that is exactly what Phife did in time for "The Low End Theory" (1991) where he played a significant role and would be the beginning of Tribe including stand-out tracks featuring Phife as the sole emcee (these include one of my all time favorite songs in "8 Million Stories"). For a jazz fanatic such myself I'd have to say that A Tribe Called Quest probably came closer than any other hip-hop group or artist (including other worthy players such as GURU, Pete Rock & CL Smooth, Digable Planets and Buckshot LeFonque) in actually chanelling the esthetics and spirits of jazz and seemingly effortlessly transcribing it into a Hip Hop language. Phife and Q-Tip often used their distinct voices in the same way an alto sax player like Cannonball and a tenor player like 'Trane either built tension in "dueling" each other or built on each other solos/verses. Not to mention the call-and-response nature of so many of their classic hooks, a main staple of american black music dating all the way back to the plantation field and becoming an important part of both jazz and blues ... And that's just in speaking about the vocal part of the group's legacy. Tribe truly introduced the power of the low end to Hip Hop, with their heavy use of the acoustic bass (or stand up bass if you will) to fantastic effect... not to mention their heavy reliance on the Fender Rhodes electric piano which instantly recognizable sound had helped define jazz since the late '60s and been especially important in soul jazz and early jazz fusion - two subgenres that would become extremely important as sample sources in Hip Hop over the coming years. But it was Tribe (and a few others like Showbiz and DJ Premier) who really started that trend. Hell they even got Ron Carter to play on "The Low End Theory"!

While some people unflinchingly give too much, sometimes all, credit to Q-Tip alone for Tribe's success story I would go as far as call that straight up blasphemous. I don't buy that for a second. Q-Tip was of course the defacto leader but his claim that he produced all of those records solely by himself I feel are strongly revisionist history - check out a track like "La Schmoove" by Fu Schnickens or the amazing remixes for BDP's "We In There" and that Ice Cube joint that Ali Shaheed produced all by himself. Or why not go back to the HHC interview with the whole group that ran around the time of "Midnight Mauraders" where both Ali and Tip was asked and answered the question what they used when producing their music. And it's a safe bet that up and until "Beats, Rhymes & Life", Phife had suggestions for additions to the music as well - that's just how it works within a group. The whole thing about Tribe could never have come from any single man of the crew, but was the result of thee great, yet different minds came together. In their 10 years as a functioning, working unit this powerhouse trio released five albums - four of them being extremely good, while their last album showed a group struggling to keep it together which is not to say that it doesn't have it's selection of bangers. Although it probably never would have happened either way it is now certain that that final Tribe reunion album will definitely never happen now, and that is a sad confirmation.

But I do hope that Phife recorded enough material and was close enough to finalizing his sophomore solo album which he constantly mentioned in interviews over the last years. The first single, the DJ Rasta Root produced "Dear Dilla" was both a heartfelt dedication to a fallen comrade and an incredibly dope track that spoke to any true hip hop conniseours. As most fans are likely to have whipped out their Tribe albums during the past week, I have a feeling people are still sleeping on Phife's original 1999 debut "Ventilation: Da LP". Released in the same year as Q-Tip's "Amplified", it's easy to see why Tribe didnt have a chance of continuinig post "The Love Movement" at the same time as the differences between the albums sheds light on why the latter album lacked a coherrent sound. While Q-Tip was obviously interested in going a more commercial route, with a stripped down sound without the lush Fender Rhodes sounds and sample heavy jazz esthetic mentioned above, Phife kept it as real as his love for The Knicks for his project. Interestingly enough Jay Dee played a major role in the production of both LP:s (creating four songs for "Ventilation" and its singles) but Phife would complement his work with slamming cuts by Pete Rock (including the criminally overlooked "Melody Adonis", a boom bap manifesto which also featured a Beatminer on the turntables), Hi-Tek, Supa Dave West, Fred Wreck and least succesfully Rick Rock. While it's not a perfect album by far, it is still well worth several listens and was ample proof that Phife could do it on his own although it in a way did show that he sounded best in a grou setting. The same can be said about Q-Tip and "Amplified", and Shaheed's subsequent Lucy Pearl LP the following year. What all three projects truly proved was that each member of A Tribe Called Quest were dope on their own but when they came together as a unit that they truly made miracles happen. Don't forget that!

Though Phife Dawg was quiet the last few years, barely even making guest appearnces (save for some excellent contributions to Slum Village's last two albums and a banger for producer Oh No), he had already left his mark on hip-hop as a culture, on hip-hop as a music form, and on hip-hop as an art form. I hope more people will start to realize how integreal he truly was to A Tribe Called Quest, a group that is often held in the highest of high esteem and often top countdowns of the genre's greatest groups of all time. So while we continue to bump Phife Dawg's music over the coming weeks, let us bump "Ventilation: Da LP" and its B-sides, let us bump Tribe's "People's Instinctive Travels...", "Low End Theory", "Midnight Mauraders", "Beats, Rhymes & Life" and let us bump "The Love Movement". But why should we stop there?!

For your listneing pleasure and in honor of Malik Taylor, also known as The Funky Diabetic and The 5 Foot Assassin, I have put together a compilation of some of his work not appearing on either of the albums mentioned above. It also excludes remixes unless it feature a unique verse by Tha Dawg, such as on the "Stressed Out" single version. Included are tracks ranging from his breakout year, 1991, and up until his final single - the previously mentioned "Dear Dilla", which takes on another dimension of sadness now thaat he himself faced a somewhat similiar fate at a way too early age. Included are production work and additional vocals by musicians such as Ali Shaheed Muhammad, Q-Tip, Consequence, Chi-Ali, Black Sheep, De La Soul, Diamond D, Pete Rock, Chip Fu, Whitey Don, Oh No, J Dilla and Slum Village but there's no question that this is Phife's show all the way. Included are also most of the rare underground 12" EP:s he released throughout the years. YOU'RE ON POINT PHIFE!! REST IN POWER!! 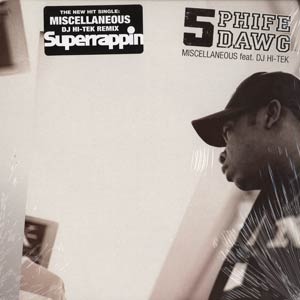