Any Wu-Tang related sites since the beginnings have had a FAQ about what that music that was played in the interlude to Spot Rusherz. Any even pretending Wu fanatic know by now that dope beat and rhymes was a RZA-produced Clan commercial commisionned in the first half of the '90s. Like the snakes these corporate business is, St. Ide's was at the time aiming for a big splash in the black and minirorities community. Think of it, what other product in 1992/1994 was marketed to blacks. Sure there were the Sprites and Mountain Dew commercials as we willll, but that was still a couple years down the road.

But back to the topic - although only one minute in length (barely), it's ovvious the grop didn't just see this as an easy paycheck but rather made sure they had some real hot, well thought out shit. RZA's production evokes outdoor neighborhood barbeques on a hot summer day. And there's no question that Meth Ghostace, Raekwon, U-God and RZA were taking their time to write their short verses to make sure this came out the right way. Just check this immaculate Ghost verse, delivered with his nasal power bars style of the '90s. "Call me the Wallabee Champ, stretched out, could never be Son/ Ricochet daily hit the deli for a cold one/ Naturally blessed, yes, my rap is like a laser beam/ That blows in the bushes, St. Ide's fill the canteen". A 30 second edit was aired on MTV, while the full 60 seconds joint appeared from time to time on radio. Thanks to the homie Cilvaringz for the first time we have "St. Ide's Commercial" not only in full, but for the first time in as good a quality as possible. This was given to him by RZA and taken straight from the ADAT so the quality is really superior to anything you heard before though it's not really mixed. Oh by the way, track is produced by The RZA with co-production by Method Man according to 'Ringz. 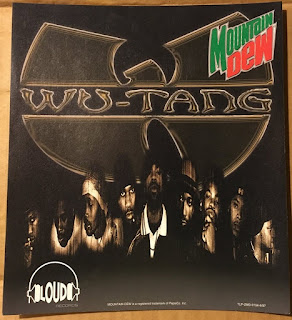 The St. Ide's commercial is relatively known after all, it had its TV spot and been all over the net. However only the real Wu heads know that RZA and the Clan was commisioned to do a Mountain Dew commercial somewhere between '96-'98 and a 30 second snippet used to to be available online around 2002, but I haven't seen it for YEARS (the actual collaboration was aborted I believe). Now, once again thanks to Cilvaringz, he has uploaded the full one minute song - which plays more like an interlude than a commercial. Produced by The RZA, it deifinitely got that "Wu-Tang Forever" sound and the five legendary emcees all sound like they did on that album (where they do me was at their absolute peak). Again, Ghostface steal the show for me, caught in between his stream-of-consciousness style and his more rugged street persona, while Deck is always Deck, Masta Killa does what he always does, etc. A must hear! And a big thank you goes out to Cilvaringz and the peeps at Wu-Corp. for these gems - but more people deserve to hear them imo!

WU-TANG CLAN - THE COMMERCIAL ANGLE
Posted by lost.tapes.claaa7@gmail.com at 11:08 AM