A few days ago the great news arrived that a release date has finally been set for Bumpy Knuckles' long-awaited collaboration album with DJ Premier. If everything goes as planned, "The Kolexion" will hit stores on March 27 and you can bet your ass that I will be picking it up on day #1. Bumpy Knucks, or Freddie Foxxx, as he's equally known as, has been a long time favorite of mine with absolutely mind blowing verses on classics like Boogie Down Production's "Ruff Ruff", Kool G Rap's "Money in the Bank" and of course Gang Starr's "The Militia". Building a strong rep by viciously destroying all competition on battle-like posse cuts like the ones mentioned above, led right up to his masterpiece "Industry Shakedown" in '99 which really made me take notice. The 20 tracks long album showed an emcee's MC in full battle mode with one of the ruffest voices and hardest flows you'd ever heard. While the shakedown was brutal and heavily thugged out it also made clear that Freddie Foxxx was more than just another street guy with a microphone. He had strong lyrical concepts, charisma and clearly cared a whole lot about the culture. On top of all that he knew how to pick perfect beats that really suited his strong delivery, even proving to be a very capable producer himself, avoiding getting outshined by the likes of Pete Rock, DJ Premier, Alchemist and Da Beatminerz.

Since then, Foxxx hasn't really managed to follow suite with another full-length worthy of his capabilities although there's been some flashes of brilliance along the way. Where the albums have failed to deliver, however, the cameos and limited 12" singles have continued to keep his name alive as one of the sickest rappers of all time. Throughout the years fans have been able to hear him on almost 20 records with Premier and their collaborations pretty much always live up to the expected hype which gives me high hopes for "The Kolexion".

While awaiting the release date, I have put together "Gangsta Poetry", a collection of 16 of the heaviest Bumpy Knucks' joints recorded between the late '90s and somewhere around 2006. As I mentioned Foxxx has always known what beats to pick and haven't had a hard time getting 'em from the game's very best. On this mix you'll find his raw flow underlined by several neck breakers laced by Preem and Pete Rock a long with contributions from Da Beatminerz, Showbiz, Jazzy Jeff, Kev Brown and D.I.T.C. affiliate Ahmed. Of course if you haven't done so already don't forget to check out "Crazy Like A Foxxx", "Industry Shakedown", "The Konexxion" and "Lyrical Workout". Aight 'nuff said; check out the "tape", make sure you crank up the volume and be prepared for intense HARDCORE!

EDIT - "The KoleXXXion" did live up to every single one of my expectations and is now my second favorite Foxxx album. But since this compilation featured two tracks that eventually wounded up on that project, I deleted "The Life" and "The Lah" for the re-up. Since the tape focuses on Bumpy's work with high profile producers, I replaced the abovementioned cuts with the Premier laced "Mic & Gun", and the Pete Rock produced "We Gon' Win". The latter is an interesting piece as it's an exclusive Foxxx demo song set over one of the "PeteStrumentals". The ?uestion is whether or not this is simply a case of Bumpy ripping an existing instrumental, or was it in fact a song he originally recorded for "PeteStrumentals", though they ended up using "Mind Frame" (notice that it has a real song structure with verses/chorus)? 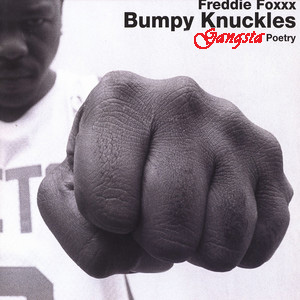 BUMPY KNUCKLES - "GANGSTA POETRY"
Posted by lost.tapes.claaa7@gmail.com at 5:44 AM