In The House with SIDE EFFECTZ 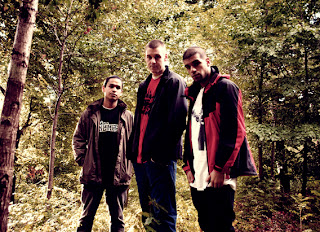 Followers of The Lost Tapes should be aware of Side Effectz presence on the underground scene this year. For those still not in the know, Side Effectz are a true school sounding trio that releases music with emphasis on sample-based beats and lyrics with substance. Through their own imprint, AOTS Entertainment, the group released their second official album earlier this year. "The Wood Sessions" showcases their passion for the vintage hip-hop music they grow up on as producers Juancan and Akopalips with emcee Linkan delivered an LP that hopefuly, and deservedly, will gain them a larger following. Without stepping out on a limb I dare to say that Side Effectz are the most interesting export from Sweden's hip-hop scene since Loop Troop debuted.
Last week I spent an evening with Juancan and Linkan talking about their latest album and the process that went into the music on it. Unfortunately, Akopalips couldn't make the interview session but I managed to get a few quick questions answered by him via phone so it's all good. Besides the publication of this exclusive interview, The Lost Tapes is today also proud to premiere the group's brand new video for the song "Chop Trees". Enjoy!
claaa7: For those not yet initiated, could you give us a quick introduction to who Side Effectz are and what defines the music y’all make?
Linkan: Side Effectz is Linkan on the mic, Juancan on production and Akopalips on beats and turntables. We're basically 3 guys with a true passion and love for hiphop, and good music in general. We're all about doing our own thing and bringing the AOTS flavor into everything we do. We're not concerned with trends and bullshit.

c7: I know a lot of heads have been waiting on the release of your second album, “The Wood Sessions”, for quite some time now. How long did the recording process take and what changes did the music go through?
Juancan: The first song for the project was recorded somewhere in 2008 so about three years all in all. Among the first records we did was “Same Shit…”, “Moonshine” and “Heigher Heights”.  When it all was said and done, the songs that made the final cut were also those that had changed the least.
Linkan: The album has gone through a shit load of changes throughout the years we’ve been working on it. Many of the songs have transformed over time. “Depp” is a good example. I originally wrote that back in 2008 but between then and the final version you hear on the album, it has gone through several stages. We ended up using the original vocals but the beat is completely different. The concept of the song is something I really could relate to at the time I wrote it and first recorded it which led to the original vocal take being the best.
c7: You debuted in 2008 with”AOTS: The Album”, since then a lot of things has happened. What would y’all say is the main difference between the first and second LP?
Juancan: You got the factor of growing older and naturally evolving as a musician and as a human.
The resources we had when we recorded our debut were far more limited and as of that the ambition wasn’t as high. We really wanted to get something out there. “AOTS: The Album” ended up being a heavy record too though.
This time around I wasn’t as involved in the physical process of laying down vocals and handling production duties but I’ve still been a major part of the creative process. It’s still very much a team effort, it’s still Side Effectz as a group and that’s what matters. I consider myself a producer first and although I’ve kicked a verse every now and then, I always felt that I could identify myself a lot more with being behind the music which is why you don't hear any verses by me on this one. 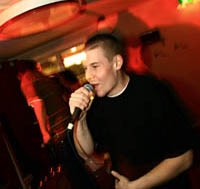 Linkan: I think we’ve always had the beats on lock but I feel that I’ve grown a lot as a lyricist since we first debuted. Overall the sound is bigger and better as far as the mix and mastering and the lyrics are tighter.
With “The Wood Sessions” pretty much the entire album, and the entire recording of it, were handled by us. From the lyrics, to the beats, to the mixing – all of that is 100 percent Side Effectz. We originally started working in an outside studio together with an engineer that we’d met. The thing that happened was that we never could agree on the way the mixes sounded, and at the end of the day we took a decision to handle it on our own as well.
c7: Another thing that stood out to me was the use of a live guitarist on a few of the tracks. How did that go down?
Linkan: Zeko [Pelivani] was around when we recorded the album and worked on it in the sense of being a studio engineer. One time during recording he just picked up his guitar and kicked it and we could instantly tell how great it sounded on “Moonshine” and “Lovesick”. It was a definite keep.
c7: What would you say is your favorite verse on the album and what song, overall, means the most to you?
Linkan: "Lovesick", I really dig the entire concept and the way the metaphors are used. My guess is that it's not a song you'll get entirely the first time you hear it.
Juancan: For me it's “K.Y.D.A.” – there’s a lot of power to that song and it fits damn well on the album. I like the intro, the changes and switches in the production, the lyrics and so forth. Overall, it's the perfect intro to the LP.
c7: One of the joints that stood out to me was “H20”. What was the concept behind that?
Linkan: It’s a concept song about how water is divided in the world in an unbelievably unfair way. Here in Sweden it’s a basic thing that you hardly reflect on whereas in large areas of the world there's a huge need for it while it's something we all need to survive. 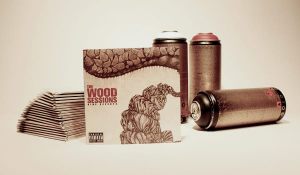 c7: As a strong believer in the original LP format I was pleased that the album clocks in at roughly forty minutes with ten songs (plus three interludes). Was it a conscious choice to avoid filler and bullshit by arranging it that wayt?
Linkan: We could definitely have made it longer; there were records we entirely cut to not fuck up the flow of the album. We wanted to make sure we could guarantee a great listen from beginning to end.
c7: Previous to the album you released a mixtape with CAP who is also one of the featured guest lyricists on the album. Are there any plans for recording an entire project together?
Juancan: We haven’t really thought in those patterns yet, but we are all close and companions so it’s very likely that you’re going to hear more songs from us together in the future.
[We interrupt our conversation to call up Akopalips.]
c7: As opposed to your debut album, what do you think stands out about "The Wood Sessions"?
Akopalips: We all have grown as both artists and persons since then which in turn has helped us find and develop our own sound. Thereby the confidence in ourselves and our music has grown too.
c7: You did the majority of the beats for this album. Tell me a little about the way you produce your records; what do you use, etc.
Akopalips: What I use to produce a certain record really depends on my mood for the day and what I'm aiming for. Often it's the MPC1000 combined with Reason.
Of course there's much crate digging going down too. There's alot of Latin American music in my collection which is something that always been around me and influenced me.
As far as this album goes, the thing that' took the longest is the mixing and mastering. I was never satisfied when we had others to do it so the logical choice for me was to take it on myself. And I'm a straight up perfectionist haha!
c7: One of the guests on the LP who you also worked with on the preceeding mixtape was S.T.I.C.S. How did that collaboration happen?
Akopalips: He liked our music and reached out and one thing lead to another. Besides the two tracks released so far we've got some stuff in the stash that you'll probably get to hear real soon.
c7: Nice! So last but not least, what cut off the LP are you most happy with?
Akopalips: That'd be "Same Shit, Different Toilet". 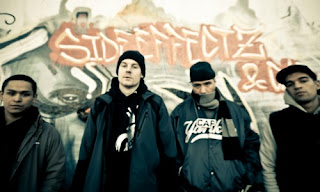 c7: What can we expect next from Side Effectz?
Linkan: Right now we're trying to make sure to get as many gigs as possible and maximize the promotion for “The Wood Sessions”. As far as music goes, a project titled “LoTech Original” with local producer A-Dub is in the plans.
c7: Any special influences that helped you in finding your sound?
Linkan: Too many! Everything from Wu-Tang’s old shit to records by Bo Hansson and Bob Marley plus ill books and wack TV-shows [has been an influence on our sound].
Juancan: “Enter the Wu-Tang” still stands as one of my main influences, and especially RZA’s production on it. I also listen to a lot of movie scores, Ennio Morricones sound has been a huge influence on my music.
c7: Any last words or shout-outs?
Linkan: Shout outs to all the homies in V-Town, rest in peace Kaddu and Slick Rick!! AOTS!
Juancan: To my boys in Side Effectz, let’s keep on killing it!!
To cop music and check out more information about the group visit Side Effectz Music.
Posted by lost.tapes.claaa7@gmail.com at 9:47 AM

Email ThisBlogThis!Share to TwitterShare to FacebookShare to Pinterest
Labels: interview, side effectz, Video