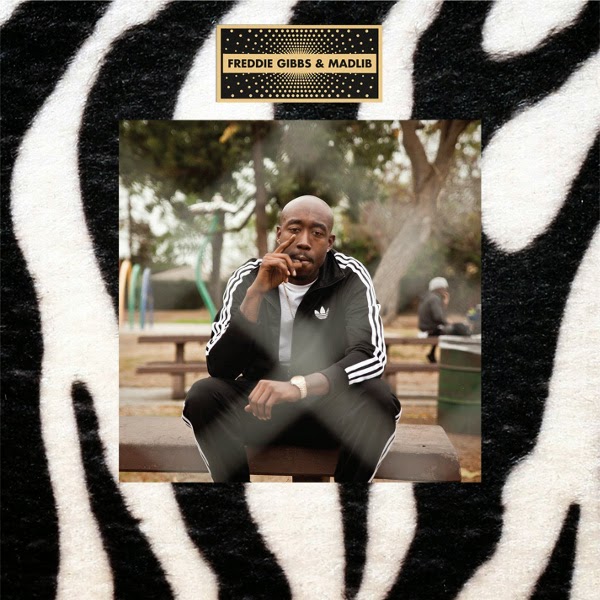 I don't know how many times I've stated over the last six months that Freddie Gibbs and Madlib's collaborative one MC/one DJ full-length "Cocaine Pinata" that is now finally available to the public. The reason why I've held this in such a high regard even before it was even out is based on several things - the incredible chemistry heard on the several independent singles released leading up to the official release which is now upon us. Another important factor for me is to finally be able to hear Gibbs, who I consider one of the strongest street spitters operating now, finally getting a whole batch of  smoked out underground West Coast bangers whereas imo most of his previous projects has been quite unbalanced. The CD version of the album (which now officially goes by just "Pinata") on Madlib Invazion this Tuesday, while the 2xLP set is slated for a Tuesday releease.

A bit unfortunately the album leaked almost a week before the official release date; I of course buy most of the 2xLP sets that I really dig no matter if I heard them before but that's not the case for everyone. Anyway, I've been able to bang this quite a bit, and its not only a very dope album on first listen but a real grower as well. Cuts like the majority of the singles ("Deeper", "Harrold's", "Shame", "Thuggin'" all appears). But considering all tracks were recorded for this project, and it does feature 17 tracks all-in-all and clocking in at 60 minutes,, this is definitely one to sleep on and that vinyl release will definitely get my money. To be perfectly honest this is by far Gibbs finest full-length offering yet in my huble opinion and the chemisty between producer/MC is absolutely terrific. I really hope they will continue their musical relationship!

Pretty uch every beat and rhyme trully compiments each other extremely well (but hey what do you expect). If you're feeling the music as much as me this could turn out to be an amazing group just like MF Grimm & Drasar Monumental is a group these days (read more about that in my extensive Lost Tapes interview with 'em). It's a truly dope front-to-back listen - well there's a few pointless skits. The album ín both formats are available @0 FatBeats, so what you're waiting for? If it's to hear the project before you spend the cash on  this dope album - you can now hear it in full thanks to the Spotify upload. I don't approve of all the guests here, but it's nice to hear BJ The Cicago Kid, Raekwon, Danny Brown and especially Scarface over Madlib beats so just that is worthwhile listening of course to say the least. It's not entirely perfect but Check it out below and if you don't have Spotify - DON'T SLEEP and yo, TURN IT UP too!!