I know it's been a very long time since I hit you up with one of the typical Lost Tapes compilation that orginally was the whole basis for this site, which boils down to two reasons - I lost my entire harddrive a while back, and i've been very busy with non blog-related issues (remember this is a 100% non-profit site). But in order to make that up for you good brothers who check my blog on the regular I am going all out with this new comp that is something I've been fiending to do for for quite some time. Back in '93/'94 the Mighty V.I.C. (of early Beatnuts and later Ghetto Pro's fame) and Godfather Don (the mastermind behind Hydra Entertainment and countless classic productions and solo material) teamed up as a production unit called The Groove Merchantz in the early to mid-'90's, and though they only released six productions and/or remixes as a group, they got a whole lot of stuff credited to their own names as producers (though most Godfather Don's production credits used here including a lot of solo stuff as well).

What I decided to do is to put them all into one compilation, using a two voulme approach if you will. Each "disc" will start with three Groove Merrchantz classics, followed by various V.I.C. and Don productions from the mid- to late-'90s. I got all the tracks on my computer, and as I just sequenced the first volume I'm putting it out right away for your listening pleasure, and without a doubt Volume 2 should be out hopefully this weekend. And the same formula is repeated on the first installment will carry over to the second one, albeit of course with all "new" songs. I hope you really dig this bc I know I've been playing the shit out of it. PURE hardcore hip-hop to say the least. Download, press play, TURN IT UP and let the headbanging beginning. Once I have completed the second installment, look out for another ill New York legends compialation I've been working on that should be coming your way very soon. I have a hint for you though - "BOOOOHAAAA"! One last thing since it's very hard to find actual pictures of VIC & Don together, I decided to go with a minimalist Godfather Don cover for "Dusty Grooves Vol. 1" while the second one will have a V.I.C. cover. Please feel free to drop a comment section while you're at it. 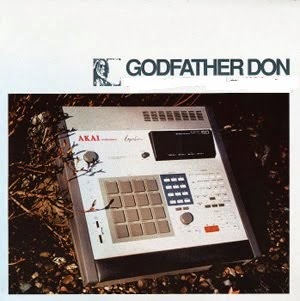 GROOVE MERCHANTZ - "Double Grooves Volume 1"
Posted by lost.tapes.claaa7@gmail.com at 7:37 AM