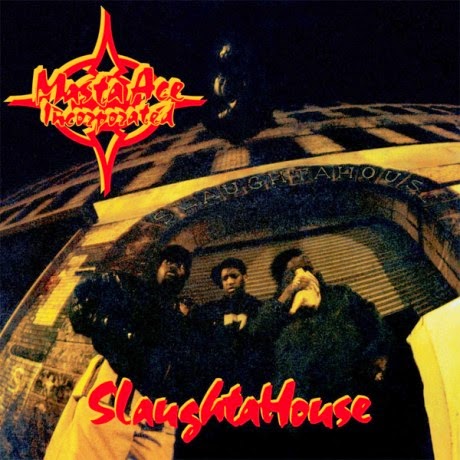 Hip-Hop journalist Brian Coleman released the absolutely must-read book for any true hip-hop heads a few years back in his "Check The Technique", which saw Coleman interviewing the involved artists in the making of 26 or so Classic hip-hop albums from the '80s and '90s. It's one of the most interesting books I've ever read on hip-hop and it's milestones, and not long after its release the Word about the second installment started to spread. But as so much time now has passed I was really doubting we would ever get to hear that second volume.
One of the albums featured in the new installment is the mindblowing Masta Ace Incorporated '93 album "Slaughtahouse" - a project that has meant a lot to me as a hardcore hip-hop fanatic. The Always impressive EgoTripLand.com has been given the get-go to do an exclusive full-length preview of the entire chapter on that album, including the track-by-track breakdown. Read an excerpt below and head over to the full article via the link below; throw on "Slaughtahouse" and follow the link at the bottom for the full Ego Trip article. ENJOY!
Late Model Sedan
I love that track, the beat especially. Latief did that one. He should be famous right now. The rhyme on that was actually based on a flow that Ice Cube did on one of his albums. “Ghetto Bird,” I think. After that song and “Jeep Ass Niguh,” the album definitely started getting darker.
Jeep Ass Niguh
That was the lead-off single for the record. It was a double A-side, with “Saturday Nite Live.” We did videos for both songs. When I perform that today, people just start jumping around. It never blew up like it could now, but it was a good underground, hip-hop purist record. Cars were just something that I was into. I had recently bought my first Jeep, when my first album came out, and I just kept buying tons of car magazines and was figuring out how to hook the thing up with a giant sound system. Driving around Brooklyn just became part of what I did. Not too many people were making songs about cars on either coast. “Jeep Ass” was definitely one of the first.
Saturday Nite Live
That was a single with “Jeep Ass Niguh,” a double A-Side. Our whole crew was in that video, everybody we grew up with. That was fun. We all had baseball bats and big sticks, being real rugged. That was the whole Naughty By Nature influence. We were in an abandoned building and a highlight was that a famous graffiti writer, Cope 2, was in it. I had never met him, but he was famous to me. He came to the set and did a couple throw-ups, and one of them is in the video. That set was pretty ill, too. One time the cameraman stepped into a hole and fell. One leg went into the hole and he got pretty hurt, but he kept filming. The abandoned building on the cover is the same one where we shot the video. It’s in Crown Heights and it’s all re-done and condos now. I put that song last on the album because it starts with such a great mood and because I also wanted the album to end on an “up” note. Lord Digga wasn’t supposed to be on that [as an MC] at first. At the time, early in the album, he wasn’t writing good quality stuff yet, lyrically. He was just starting to rhyme back then. We all did our verses and he was sitting there with a sad face. Up until that time he tried, but we’d never put him on. But on that one he got it together and we all agreed it was dope.

MASTA ACE - "CHECK THE TECHNIQUE" (Article @ EgoTrip)
Posted by lost.tapes.claaa7@gmail.com at 8:52 AM