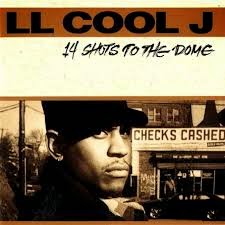 Following the 1990 release of LL Cool J's "comeback" album "Mama Said Knock You Out" LL was once again at the top of his game. When an artist of LL's stature who's been succesful for cose to ten years want to switch it up a bit too much, the fans and record buying public might want to find negative aspects of a sophomore project like this to hold on to - in turn making it a flop. This was the case with LL's 1993 album "14 Shots to the Dome" which is something that has always suprised me. Personally I got nothing but love for this LP and counts it as just another in a long list of powerful, consequtive LL albums - his last good allround release to me was the following '95 release, "Mr. Smith" but I'll save that for another post. "14 Shots" is far from a perfect masterpiece but as it was the first LL album that I truly fell in love with it still remains one of my favorites.

I hold "Mama Said Knock You Out" as one of the finest records ever put on wax, and the deep bass, high energy and agressive flow that introduces this LP with "How I'm Comin'" always got me in the same mood as the anthem-like title track of its predecessor. You got the breakneck beats, horns, the pounding drum programming and an agressive and self-sure LL doing what he does best - hardcore hip-hop. In fact Marley Marl, who was responsible for the entirety of "Mama...", produces half of the album, while Bobby "Bobcat" Ervin is responsible for four songs (and QDIII the remaining) - now that's a true all-star team that can give an artist exactly what type of music he needs for a particular song. While Marley never quite reach the heights of the previous LP:s finest moments, he always comes through and at this point there's no question that he and LL had a great chemistry going in the studio.

If you're not familiar with Bobcat he's produced plenty of powerful singles for LL in the past ("I Am Bad", "I Need Love" (in fact the majority of "B.A.D."), co-production on "Mama Said...", and many more). One of the most powerful songs amongst Bobcat's production comes with the album closer, "Crossroads", where he utilizes a full choir and a symphony orchestra over a pounding boom bap production that'll have necks swinging. At the time using live instrumentation was a new method for LL, yet it works extremely well. As if that wasn't enough, LL takes the hectic backing to spit in an agressive double-time flow; three impressive rhymes about the state of the World today. A song somewhat reminiscent of its predecessesors album closer in "The Power of God". While that track was more laid-back, this is a full-blown assault on the social state of the world and one of the LP:s heaviest tracks..


Just like Marley did, Bobby "Bobcat" Ervin also proves what an an amazing team he and LL formed on cuts like the drum, bass and turntable heavy "Ain't No Stoppin'". You got LL's classic bragadocious rhymes which over Bobcats high-powered instrumental is a classic in the making. This is pure '93 hip-hop, boom bap shit with a fat hook, slamming verses, lots of scratch work and small bits and pieces of a guitar line and a small vocal sample. The final Battlecat joint comes close to the end and bare the title "Diggy Down" - Another strong cut, featuring much of the same elements as the aforementioned 'Cat productions, showing LL going hard over an especially heavy bass line, that's underlined by powerful drum programming and accentuated by cuts and the occassional vocal sample. All the while, while this ain't exactly the type of track we're used to hear LL on, the New York legend sounds as fresh as they come here.

Half the album is produced by Marley Marl, who of course did all of the "Mama Said...." album and much of it sounds like what he and his protogé K-Def laced for acts like World Renown, Sah-B, Da Youngstas, and so on around this time. In fact an uncredited K-Def produced the Lords Of The Underground collaboration "NFA (No Frontin' Allowed"); he was also responsible for an excellent track entitled "Year Of The Hip-Hop" that unfortunately was scrapped from the final LP - though it was released on a limited 10" single a couple of years back. While we all know that Marley Marl is one hell of a producer, it's interesting that he has at a few times been taking credit for songs that he didn't at all conceive. A more recent example is the "Next Up" joint with Kane and G Rap on UGK's "Underground Kingz" LP which was built around an instrumental found on K-Def's "WIllie "Boo Boo" The Fool".

There's also a few tracks from QDIII on here, who brings some welcome West Coast flavor to selected parts of the album, showing LL's versatility on the microphone; although I must say that these are probably my least favorite joints on the project. But anyway this is an album that favorably can be listened to front-to-back; preferably in a good pair of headphones. An interesting fact is that there apparantly was an original version of "Soul Survivor" that was a lot rawer, and produced by Dr. Butcher, which appeared on a DJ Doo Wop tape in early '93. That version has unfortunately never officially leaked. but you can count on me being out there hunting for it.

Another interesting thing worth mentioning is the Marley produced single "Pink Cookies Gettin' Crushed By Buildings". While the original was a smooth funk banger, the true gem is the Easy Mo Bee remix that LL choose to use for the song's video. To me this should be the album version as it is far stronger than Marley's original and the melody is both addictive and works even better in complementing LL's verses. But overall this album, like it's predecessor is mainly done for the streets. It's clear that LL has been inspired by the type of hip-hop that Lords Of The Underground and Naughty By Nature were doing at the time, both in flow and beat selection, but at the same time pretty much all acts of the time would never dieny the impact LL's music had on them. In that token with LL making an album like this the circle is brought full. Unfortunately, when it was first released the album caught a lot of flack (probably because many felt LL tried too much to keep up wiith the hardcore sound of the East that was prominent at the time) but I believe that its slowly getting more and more accepted and even starting to gain a cult following. And rightfully so. If you haven't banged this in a while, I strongly suggest you dust off your copy and let it bang LOUD. For me, after this and the also underrated "Mr. Smith", he never again released an album that's worth listening to front-to-back. If you don't own the album you can listen to it via Spotify or purchase it from iTunes, or Amazon. I also added a little bonus EP for you're listening pleasure, featuring B-sides and remixes of the original album tracks as well as a few soundtrack joints from the era.