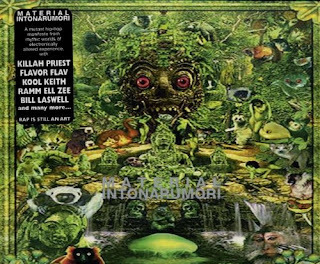 Being that I'm a jazz fanatic and all around avant garde head I think I got something for you here that you might appreciate. Bill Laswell was originally a jazz bassist with some wicked ideas who in 1979 formed his group Material together with fellow free spirited musicians Michael Beinhorn (synthesizers), Fred Maher (drums) and Martin Bisi (co-prduction and engineering). Not too many years afterwards they hooked up with musical legend and genius Herbie Hancock who had found himself in a bit of a slump with is last few records such as the ill-fated "Feets Don't Fail Me Now". He needed something radical, something that could reach the youth, and Laswell and his band thought he knew the right ingredients. So they started to work on "Furure Schock" which also featured excellent turntablist Grandmixer D.XT and the equally impressive guest musican Pete Cosey; the psychadelic guitarist in Miles' last 70's outfit who could've easily gave Hendrix a run for his money. With it's single, filled with modern syntheiszers, Herbie Hancock's virtuosity and ear for sound and Laswell's production capabilies, not to mention Grandmixer DXT's excellent turntable wizardry - heard for the very first time on a commercial single, and on an MTV single nontheless; "Rockit" is a monumental achievement in Hip Hop music and it was also the fhe first Hip Hop music video ever played on MTV. Material and Herbie Hancock would continue collaborating for a couple of more years, delivering "Sound System" and "Perfect Machine" before calling it quits. But thanks to Laswell's help he had pretty much saved Hancock's at one point failing career.

The band Material kept churning out material however, both as asolo artists and as producers of other peoples records Bill Laswell also did controversial remixes of original master tapes of Miles Davis, Bob Marley and Carlos Santana album which are actually a lot better than some might have you believe. But while Material's final album as a group was released in 1999, Laswell has continued with different groups and solo acts, but it's this final Material album that I want to discuss here today considering the immense Hip Hop homage this album is filled with. Check this....

Grandmixer DST (at one point he changed from his original D.XT so no it's not a typo) is all over this eccentric LP, and so is guest emcee Rammellzee who released several singles back in the early '80s and in 1988 dropped the album "Missionaires Moving" as part of the band Ghetto Vets. Kool Keith and Kut Masta Kurt pop up on the headnodder. Flavor Flav and DST collaborates on "Burnin'". Something very strange however is that Juggaknots appears here with their song "This Morning", here with its production credited to Laswell and Material, yet it's the exact same version as the one that appeared on Mr. Len's album the very same year. Very strange, but it's an outstanding joint nontheless - but someone need to ask either Len, Laswell, Breeze or Lady Heroine to clear this up. Prince Paul right hand man Scotty Hard appear on a joint and Bernie Worrell has some killer keyboard lines on "All That Future" At least for me, the real treat, on an album full of treats is the ambient, almost psychadelic "Temple Of The Mental" featuring Killah Priest in full "Heavy Mental" mood. Matter of fact, Priest is rhyming over a sitar and some tabla drums in a fow very similiar to the hypnotic title track on the aforementioned debut. Don't sleep on this record, even hardcore Kilah Priest and Kool Keith fans doesn't even know of it's existence! You can buy the album from iTunes or Amazon but I uploaded a three track sampler for y'all which I'm sure will make you want to cop this rare gem.

MATERIAL - "INTONARUMORI SAMPLER"
Posted by lost.tapes.claaa7@gmail.com at 1:23 AM