THE UN - "The UNderstanding" 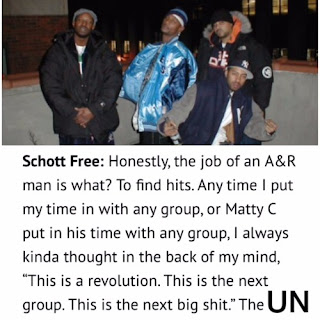 Oh shit, it's not every day a brand "new" (or rather unheard) track from the hardcore hip-hop quartet The U.N. The group consisted of high school friends Roc Marciano, Dino Brave, Mic Raw and Laku and after being "discovered" by Pete Rock who helped to put them on and get them exposure by both featuring them on his "PeteStrumentals" album as well as releaseing their two joints "Cake" and "Nothin' Lesser". The Hip Hop world took notice and they were managed and backed up by legends like Q-Tip, Alchemist, Pete Rock, Large Professor, Oddisee and in 2004 they signed the first Hip Hop deal on Carson Daly's (of MTV fame's) new independent label - imagine that. Either way the record stands as one of the finest hardcore hip-hop albums of its era, and any unreleased music from it is highly appreciated.

Now Scott Free who used to be an intern at LOUD Records back in its heyday and worked on classics like "The Infamous..." and was also an exec on "U N Or U Out" has unleashed an unmixed and unmastered joint that didnd't make the album called "The Understanding". But we take what we can get right, and this is a dope joint so turn this mother up LOUD!! Produced by Rob "Reef" Twerlow.

Posted by lost.tapes.claaa7@gmail.com at 8:10 PM