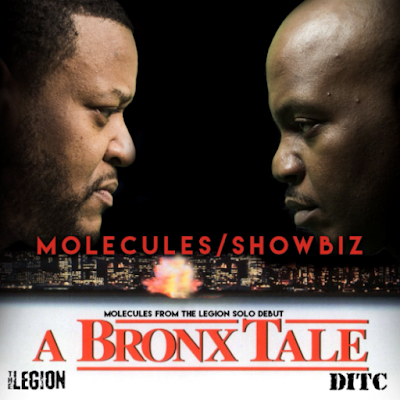 Feel free to hate on me all you want for posting shit that's been out for some time but as you know I haven't been updating The Lost Tapes and slept on a bunch of solid releases myself and this is one release that deserves that spotlight big time. This will most likely be the last such update as I don't need to make this some backlog site but this May release by The Legion's Molecules over Showbiz beats really brought out the certified Hip Hop head in me like it was the late '90s all over again. For sure, there's been some hot shit dropping while I've been away (Kendrick, MC Eiht, Boxcutter Brothers last project which I reviewed for Vendetta Vinyl) but this one right here feels a little extra special to me as Show's been a favorite of mine for a long time and I feel that this is all-around one of his finest work in some time. Molecules was of course part of The Legion who dropped the much slept-on "Theme + Echo = Krill" back in 1994 so he is a seasoned underground veteran as well, and his connection with Showbiz on wax goes all the way back to "Runaway Slave".

Both lyrically and sonically "A Bronx Tale" sounds like it could have been recorded in 1995 - and I mean that in the best way possible. Many producers try to recreate that classic sound of the Golden Era while only ending up with something that sounds like an empty knock off of the real thing. This is the real thing right here. You got the breakbeats and gritty drum loops, the accentuated bass lines, horn stabs that fades in and out, Rhodes and all that good stuff. Combined with Molecules' knack for ghetto storytelling in a gruff voice that will speak volumes to the type of rap heads who can't get enough of hardcore emcees like Blaq Poet and Bumpy Knuckles and you got a really well balanced, strong release.


Fans of D.I.T.C. and The Legion will of course remember that 'Cules and Show first worked together as a duo on the brilliant storytelling joint "Revenge" that first appeared around 1999 on a rare Japanese pressing of the D.I.T.C. album. That classic cut definitely feels like a prequel to this project and that could never be a bad thing. Grab the 12" vinyl or the CD (both which also includes the full instrumentals for all cuts) over @ Fat Beats and check out the stream below.

Posted by lost.tapes.claaa7@gmail.com at 7:04 AM