PRODIGY mural pops up in Queensbridge 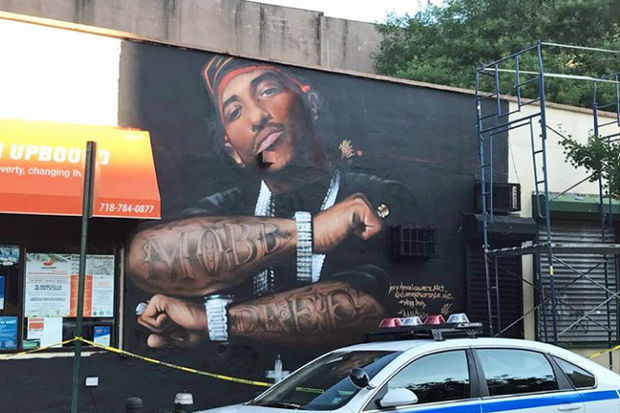 On June 20 we lost one of the true legends in this Hip Hop game as Prodigy, real name Albert Johnson, lost the fight with his sickle cell disease. Heads over the world has been mourning as his words has touched people all over, and with one of the illest flows and voice nonetheless. Graffiti was always an integral part of the culture and memorial pieces has been an important statement and a tribute. The other day, the first of many, super dope memoral pieces of P appeared in his stomping ground of Queensbridge, on the corner of 13th and 40th street. The artists behind the mural are curator/artist Eli-Eos and portrait artist Jeff Hernandez. Check out more info about the piece and see pictures of the piece in the making over @ The Fader.

If there's anything like good news coming from this terrible event is that at the beginning of the year P told media that he was about to drop one album in three volumes during 2017. In late January he dropped the first "book" of "Hegelian Dialectic" subtitled Book of Revelations. The second part was to be called Book of Heroine and Part 3 to be titled Book of the Dead. Originally the trilogy was supposed to drop in a pretty narrow time frame and each volume would explore three distinct traits of P's personality; the occult knowledge, the party type joints as heard on "H.N.I.C. III" and the straight street shit that he built much of his career off. So Prodigy fans, its very likely we haven't heard the last word from the Hempstead emcee turned Queensbridge representative. My prediction is that we will have all books of "Hegelian Dialectic" within a year so stay tuned. And The Lost Tapes will most likely drop a solo P compilation as well. Check out this freestyle from better times and rest in power Albert Johnson, you'll never be forgotten.