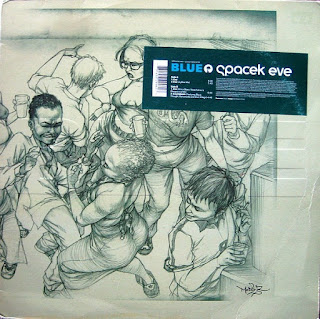 I've been on the hunt for this rare B-side for the longest, and finally came across it a while back. Spacek is a british group lead by singer/producer Steve Spacek that has produced several underground classics that defies genre categorizing. Some call it just electronic music, but labels like neo-soul, broken beat and trip hop has all been part of journalists describing the progressive trio. The band has been around since 1999 but it was with their release of the excellent "Curvatia" LP that they truly had found their sound. The first single from that album, "Eve" was released in 2000, and is a true gem in every sense of the word - especially if you're big on the Detroit and Philadelphia hip hop scenes.

The A-side features the excellent "Jay Dee Remix" which not only features a banging Dilla beat constructed right around the time that he was leaving behind the lush, Rhodes infected grooves of his UMMAH and Slum Village productions for something more influenced by Motown's legendary techno and house scene. It also features the debut on wax by long-time friends Frank-N-Dank, whose "48 Hours" is an absolutely incredible album no matter what version of it you get your hands on. While we're at it, in 2005 Dilla gave another real banger to Spacek which was made into "Dollar" and if you haven't heard that one yet before be sure to dig it out - pure masterpiee...  But I'm getting off track here, the joint I want to talk about today is the B-side to the "Eve" single called "Countdown"; produced by Steve Spacek and Jeff Mann. It definitely has that Dilla influenced perfection-sloppiness and soulful filteres however and what makes it really interesting is that it's a posse cut between Philly's Black Thought and Bahamadia and Detroit's Baatin and T3. Check it out below... I also threw in a 320 kbps version of the "Eve" remix (could only get the other in 192 but it works) so ENJOY now!