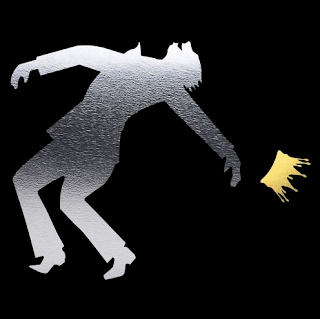 With a release like this EP, that brings back traditional hip-hop values, and invites some of the illest lyricists of the both past and present some haters might say that the legendary DJ/producer behind '96 stone cold classic "Endtroducing" is somewhat on a return. His new EP "The Mountain has Fallen" is no doubt a hardcore back-to-basics four-track project but the truth of the matter is that Shadow has been dropping gems for years; it's hardly like "Endtroducing" is his only worthwhile album and his legacy rest on what a fucking classic that was. That album broke a lot of ground as far as being 100% concocted from samples while being instrumental and sounded like totally new musical compositions. But beside "Pre-Emptive Strike" (which was recorded before '96) he kind of switched up his style and yes there's been some duds along the way; but that's what happens when you're an artist and experiment. But don't forget that he in 2011 released the super-slept on album "The Less You Will Fall" that sported a new era but borrowed heavily from what made Shadow fans first take notice, and also featured guest spots from Posdnous, Talib Kweli and even Little Dragon for good measure. If you haven't heard that album be sure to check it out ASAP.

Now Mr. Davis is teaming up with Mass Appeal, gearing up for another album, and just dropped an EP to whet our appetites and the four track project sure as hell does not dissapoint. A mixture of vintage samples, live instrument, breaks for headnodding hip-hop and some imrpessive turntable work this genre defying project will be getting a lot of play. Especially the first song that features no less than the first meeting between NAS and Shadow on the throwback banger "Systematic". Steven Price does a great job of closing out the project with the hectic "Corridors". Check it out for free below stay tuned for a new full-length by this one-of-a-kind DJ/producer.

Posted by lost.tapes.claaa7@gmail.com at 6:46 PM