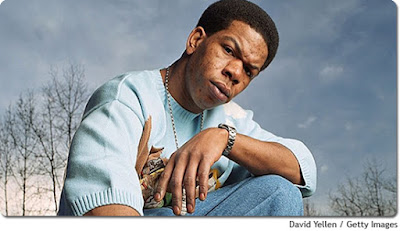 It's always sort of shameful to give artists their due props and their roses to smell only after they passed away. But in the case with Craig Mack there's no question that he put Bad Boy Records on the map with Sean Puffy Coombs and The Notorious B.I.G. in 1994/1995 and aside from an ill-fated comback album with Eric B. in '97 he laregely dropped out of the public eye. So we love Craig Mack mostly because of those records he laid down for Bad Boy back in its heyday.

It's pretty crazy looking through the discographies of BIG and Mack and see how right from jump the spotlight was always on BIG. Of course Biggie was B.I.G. but you sure get the feeling they kind of did Mack dirty, like that hilarious but sad clip of Puffy straight up lying to MTV cameras about having a new Craig Mack album being recorded and set for release in January - something that was obviously news to Mack. As a rightous man (listen to a song like "When God Comes", perhaps my personal favorite in all of Craig's catalouge) I don't think the industry politiciking on the side was worth it for him.

Anywyay it's been at least a year since I came up with a decent comp and as O-ren Ishii would say "NOW IS THE FUCKING TIME". All songs on this is tracks that was recorded during Mack's Bad Boy stint either as a B-side to one of the singles, a remix by The Hitmen, a guest apperance, a freestyle session or a soundtrack joint. Pretty short but sweet, so enjoy and as always TURN IT UP!!!

01. Mary J. Blige Ft. Craig Mack - "You Don't Have to Worry" [Eddie F remix]
While Mary J. was certainly one of Puff Daddy's artists who he helped managed and form she was a holdover from his Uptown days as she was never never really signed officially to Bad Boy. In 1992 she released her slamming debut album "What's The 411?" that Puff helped produce and featured a heavy dose of Mary's incredible soul mixed with a hip hop sensibility by inviting prodcers and emcees to appear in the studio such as Busta Rhymes. Grand Puba, Mack, Kid Capri as well as cameos by royalty like CL Smooth, DJ Red Alert, etc. Mary blew up with her debut so it was a smart business move of Puff to put Craig Mack on the remix to the already loved "You Don't Have To Worry", remixed to bring out the Hip Hop sound by Mt. Vernon's Eddie F., the "leader" of The Untouchables production crew that around this time also included DJ Pete Rock. Solid track for sure!

02. Craig Mack - "Flava in Ya Ear" [Nashmack Remix]
A darker, more brooding remix from the 12" single that while not being as dope as the original (really what is?) laced by Nashiem Myrick - who's always been my #1 Hitmen a long with his partner in crime Carlos Broady, The bass is straight up nasty and the ocassional guitar breakdown and new ad-libs makes this a must hear for Craig's Bad Boys era fans.

03. Craig Mack - "Shinika"
This track appeared on an early sample tape for "Project: Funk Da World" but must have been decided to be cut loose sometime between then and release date. Luckily this short but sweet jam wasn't lost to time as Craig instead decided to put it on various versions of the "Flava in ya Ear" single (and there was a lot of them). Produced by Kenyon Smith and Craig Mack himself this is classic Mack that could easily have fitted on the LP.

04. Craig Mack - "Get Down" [Q-Tip Remix]
This will forever go down in Hip Hop history as one of the illest remixes of all time, in such company as Pete Rock's "Represent the Real Hip Hop" for Das EFX and the Bad Boy remix of "You're All I Need" by Method Mna and Mary J. While Easy Mo Bee's original was a solid as hell album track, The Abstract incorporates everything that made him one of the sickest '90s Hip Hop producer the world ever saw. The brooding bass incorporates a bit of mystery, the horns accellerates it, the turntable work is immaculate and the jazz flavor of the synthesizers/electric piano melody really brought it all home. And both Q-Tip and Craig Mack were damn abstract rappers so hearing them together here is sure as hell a joy.

05. Craig Mack / The Notorious B.I:G. - "Let Me Get Down"
Bringing out and marketing two Hip Hop artists on your label during roughly the same time it shoud be a no brainer to have the two artists appear on each other's album. As has been documented before Mack resented the favoritism that Puffy showed B.I.G. and judging from interview clips with the deceased legend he didn't have much charisma with Mack to begin with. So when their respective albums were relased within a week of each other, not one collaboration was to be found (there was of course the "Flava in Ya Ear" remix featuring Biggie but they more or less sounded like they were going for each other's throats on there). Luckily for we Hip Hop historian buffs Puffy actullly managed to get the duo in the studio to organize a recording one time. Its a rough typical '90s boom bap joint called "Let Me Get Down", possibly concocted by Easy Mo Bee, and I do like how their voices compliment each other. Was this an early demo version of "Let Me Get Down" or not? Was it recorded with "Ready to Die" or "Project..." in mind. Who knows? Lets just be thankful that this piece of Hip Hop history exits.

06. Craig Mack & Notorious B.I.G. - Tim Westwood Freestyle
Following up that demo joint above, in further promoting the launch of Bad Boys and the just released album the two emcees and Puffy stopped by Tim Westood's radio show on August 19, '94 to spit some heat for the UK listeners. Its a historical moment where Biggie incorpoartes lines from joints like "The Points", "Think BIG" and "Oh My Lord"). The entire session is 18 minutes. Listening to this it's quite clear that there was no dark conspiracy pushing Mack out of the limelight to begin with, BIGGIE was just one of a kind. The compilation version is 5 minutes in length but I strongly suggest you check out the entire thing over @ Youtube thanks to user Masar TV for allowing us all to hear this legendary Hip Hop moment... and oh yeah, TURN IT UP!!!


If you like me and my crew up in the early-to-mid-'90s then I'm willing to bet my copy of "Project Funk Da World" that you til' this day have very fond memories of that excellent 8 bit beat 'em up game. I can assure you that a lot fewer of us have any redeeming memories of the 1994 movie cash in with Jean Clause Van-Damme and Raol Julia. However as was often the case in the mid-'90s suited boardmeeting fucks had come to the realization that kids will be fooled into thinking the film is cool if it is "endorsed" by "hip", talented emcees and singers. Enter 1994:s "The Street Figher" sondtrack which in many ways is actually better than most. Not did it only fetures this rock solid Mack jam, but one of the extremely few Nas' solo joints recorded around the time of "Illmatic" to not make the LP. Other highlights include LL CoolJ's "Life is..." and one of the fist joints by the now disbanded supergroup that included Xzibit, Ras Kass and Saafir. Well worth tracking down despite the movie.

08. Boyz II Men - "Vibin' (New Flava 2) w. Craig Mack, Method Man, Treach & Busta Rhymes)'
Another beautiful thing we miss from the '90s is the rugged posse cut and the R&B / hardcore Hip Hop collaborations that didn't sound like label intervenions at all. This little known track is actually one of my favorite posse cuts of the era. You got a pounding, pretty hard beat with guitar stabs and scratches but at the same time it's matched well with a beutiful melodic jazz sampes that does both the emcees and Boyz II Men a favor. The song appeared originaly on a "rare" Boyz II Men single for "I Remember" but shorlty after was given the wide relesase it deservered on their official album collection "The Remix Collection" - this particular version was  a remixed version by Tim & Pop of the groups original work. What might be less known is that there's even a full-length video made for this (see above).

09. Sista - "It's Alright" (Ft. Craig Mack)
Now this joint is interesting from several stanpoints. If you don't know your Hip Hop history you might have gotten the impression that Missy Elliot more or less was an overnight sensation. So was not the case at all. Just like Craig's solo cut "Do You Got What It Takes" this appeared both as a single and on a soundtrack. It was all blessed with two equally dope version. One produced by DJ Evil Dee and the remix handled by Fredwreck who was then pretty mcuch an unkown up-and-comer but his seamless blending of gritty New York style hip hop and the more laid back L.A. cultural music has by now made him a household name and one of the go to guys for peeps like Snoop Dogg, Soul Assassins and even Die Antword. I'm including both versions here so you can make up your own mind.


10. Brownstone Ft. Craig Mack - If You Love Me [Street Vibe Version]
This is strictly for completists, you might even want to skip this one after Craig's verse in my opinion. It's one of those dussin songs by all those dussin R&B-bands that popped up in the mid-'90s and wanted to be a little too  street in their image. Produed by Dave Hall.


This is a crazy Club Freestyle that should have any head go absolutely crazy if you're not familiar with it. DJ Clue and Ike Love is the host for the night, a New York club in 1995, with all the emcees being hyped as hell. Biggie absoltutely murders this and has loads of sick lines I never heard him use elsewhere.


12. Craig Mack Ft. Notorious BIG, LL Cool J, Rampage, Busta Rhymes - Flava in Ya Ear
Of course we must include this. One of the best posse cuts of all time, hell maybe one of the best hip Hop tracks of all time nnd they ALL WENT IN!

13. Sista Ft. Craig Mack - "It's Alight" [Fredwreck Remix] [*]
The remix to the aforementioned track. Just one more thing about the group Sista. They were a quartet of singers in the early '90s that released a full-length in 1993 - before that they were known by Fayze. Their one and only album, 1993 "4 All Da Sistas in the World" was mainly produced by a certain Timothy Mossley (soon to be known as Timbaland). So Missy Elliot, who then went by Sista, was the emcee of the crew before she decided to go for dolo. Like  I said above this is the same joint remixed by Fredwreck, a very early placement for him.

14. Craig Mack - "Flava in Ya Ear" [Easy Mo Be Club Mix] [*]
Another remix culled from the original 12", keeping the main parts intact but adding some new depths as well. Easy Mo Bee was a monster back then!