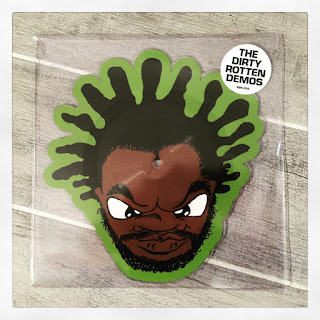 This new 12" single from the good guys at Slice-Of-Spice is a real treat to true Hip Hop heads worldwide as it unearths never before heard material by legendary lyricists Jeru The Damaja and GURU. Two tracks recorded between 1991 and '92 these joints were born right around the same time as "Daily Operation" and Jeru's first on wax apperance on "I'm The Man"; some of these might very well even have been recorded in the same day, who knows. Cop your copy (along with brand new Damaja hoodie or T-Shirt) @ Slice Of Spice.

From what I've read about Jeru's inclusion into the Gang Starr fold, the original plan was for GURU to bring in 3 of his artists and for Premo to do the same. GURU had Big Shug, Jeru and Group Home which also were the three who ended up in the crew at the time - therefore it is not suprising to see that the first songs Jeru worked on following that was with GURU as producer (his original demo was produced by PF Cuttin'). On "God Of Rhyme" GURU shows that he picked up more than a few tricks over his years working with DJ Premier as he cooks up a bass heavy jazz banger that sounds like something born in between "Step in the Arena" and "The Low End Theory". "The Damaja" doesn't work quite as well from a production standpoint in my opinion, despite a nice sax hook and a grooving bassline it just never quite gels. Don't get me wrong though, it's a nice jam nonetheless but had it been put on an album of the caliber these guys were capable of hooking up back then I'd doubt it would be a standout. Closing the set is another interesting moment in the form of "Dirty Rotten Demo" - an early take of "D. Original" which Premo transformed into the mesmerizing opening track of "The Sun Rises in the East". While it does sound mostly as what it is, an early sketch of what would become a legendary track it does give us some insight into the recording process of one of the great albums of the 1990s.

To gain more of that insight I strongly recommend y'all to check out the chapter on that album in Brian Coleman's "Check The Technique Volume II", and in case you missed it when it was first posted, EgoTrip posted a chapter on Gang Starr's "Step in the Arena" for free online. The reason it wasn't included in the book was because of GURU's untimely death which meant that only DJ Premier's voice is heard throughout the article. Still a great read and as it heavily relates to the topic within this post I'll throw it in here for you - enjoy!
Posted by lost.tapes.claaa7@gmail.com at 7:17 AM