My man Linkan came to prominence with the duo Side Effectz (who soon expanded to a trio) and with their raw and honest lyrics, boom bap drums and melodic loops and a huge respect for the true hip hop that came before with each record they soon became one of Sweden's finest musical exports. Linkan was always the front man of the group, as Apokalips and Juancan mainly stood for the production while Linkan led the show both on stage and in the studio. After the very succesful "Wonderbaum Music" (by far the group's best album to date when it dropped in 2013) it was a no brainer for the front man to try his luck as a solo artist. And in 2015 he did just that with the the excellent, short but sweet, "Almighty Bigalizer"; fans of true hardcore hip-hop with well written lyrics and a unique flow owes it to themeselves to give this one a chance. One of my trusted Australian readers wrote me an e-mail raving about how Linkan's solo debut was for him without adoubt the best album released that year. I wouldn't personally go that far, but if you think I only say that Linkan is a really talented brother creating amazing music because he's a close friend of mine you are lost as fuck. Had his music was wack I would never promote it on The Lost Tapes, so if you like my usual content don't fucking sleep on this 30 year old Swedish spitter who has cultivated a life-long love for hip-hop culture. 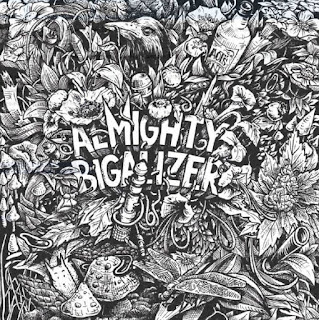 With each Side Effectz / Linkan release we have worked on something special to celebarte each relesae via The Lost Tapes, as there's beenn some great interviews and so on. This time we didn't want to do it a little different. "Almighty Bigalizer" can be streamed in its entirety over at Side Effectz Bandcamp, so for this article I asked Linkan to break down the process of some of my personal favorites of the 10 songs deep set. A lot of behind the scenes insight and a good way to get to know the artist outside of rhyming so don't sleep on this article. Up top you'll also find the brand new video for the single "MFD" while the conversation (with audio clips to stream) you'll find below. Let's get it on my brothers!

claaa7: As I know you for quite some time I know that we both grew up on pretty much the same hardcore boom bap shit as far as music goes, but whereas SIde Effectz was a democracy this time you could really steer the project any way you wanted. Some people have commented on the heavy Golden Era influence in its sound. What would you say you're influences for the album were? And while we're at it, were did the name come from?0

Linkan: I've always had a lot of love for that raw, dark, dusty 90's vibe and producers like Organized Noize, RZA, Showbiz and Havoc to name a few and I felt that I wanted to go deeper into that vein than on my previous projects with Side Effectz.

At first I thought about calling the album 'Lo Tech Original' or 'The Buena Vista Anti-Social Rub A Dub Club' but after I settled on 'Almighty Bigalizer' the direction and concept got clearer. The Almighty Bigalizer is basically a serenade to the dopest religion in town - MUSIC. It's the vibe transporter, the thought amplifier and the tool that connects my mind to the universe. Deep shit haha!!

claaa7: I know you worked on this album for a long time, in the beginning it was pretty much simultaneously with the last Side Effectz LP if I remember correctly. I know you went through a lot of beats, at one time you had contributions from people like E-Blaze, Tokyo Cigar and The Militia that unfortunately didn't make the final cut. But what were you looking for in the beat submissions and how did you pick and choose? That same question also relates to your lyrical process, how did you decide on what to make the final cut or not?

Linkan: I started looking for beats in the fall of 2014 and recorded the first tracks in January 2015. I replaced about half of the beats during the process and I still got some ill instrumentals laying around that I might use later on. The producers is a collection of old friends and long-time collaborators (e.g Juancan, daniel El Campeon) as well as new international connects like Ko Albrecht and Philanthrope that I mostly hooked up with through Soundcloud, where you can find tons of talented, unknown people doing dope things.

As for the lyrics it's a mixture of things I had saved for a while, as they felt more like Linkan than Side Effectz material and some others that I wrote during the recording sessions. The topics is still a lot about everyday life: what we do and what goes in the world around us but this is only my first solo project so I think you'll see more of a change in subject matter in the future. I'm also planning a project in Swedish to drop in the spring of 2016 so that'll be diffferent..

claaa7: Very interesting. I know the promo single you dropped as part of Side Effectz, "Stila Dig", was really appreciated amongst your Swedish fans so I think that could be a wise idea. But back to the album at hand and "Almighty Bigalizer". I want to throw out five or six of my personal favorites of the album and ask you to break them down for me and The Lost Tapes readers. Are you okay with that?

Linkan: Sure thing.. Go ahead fam!

claaa7: "ANYBODY OUT THERE" Linkan; I don't subscribe to any organized religion but the way this world was created and set up it's too perfect for it to be a fluke. I'm thinking there's gotta be somebody out there somewhere watching and laughing at us while we're running around stressin, taking ourselves too seriously, thinking we're important and interesting when the fact is we ain't shit.
The track is produced by my Växjö peeps Romero & Juancan, now rocking under the name Euphonics. "Anybody Out There" might be my favorite cut on the album. It's soulful and crispy and I get some good points across.

claaa7: "YOUTHMAN"
Linkan: "Youthman" is produced by Philanthrope, a dope producer from Austria with a catalog full of jazzy, smoked-out beats. The hook is something I had laying around for a while and when I heard the beat it fit like a glove. My man Antone Mecca from Rusty Label is featured on there but I originally wanted three rappers to kick their stories and perspectives of youth but since the third one didn't finish I wrote the last verse dedicated to the youthman of today. To me it feels like the brainwash and confusion is at an all-time high right now. With all the information and propaganda coming at you from all angles it's hard to dig through all the bullshit and be original.  The youth is the future so Youthman: Use your head, be yourself!

claaa7: "'TURN IT UP"
Linkan: That was done very quickly, in like 30 minutes. Me and Locsta was in the lab vibing to the beat from Ko Albrecht and he was like 'You got something?. 'Yeah. You got something?' 'Yeah... Let's Go'. I think it captures that raw feeling and sounds very organic.
Locsta is another Växjö cat that been spittin but haven't released that much. He's definitely dope so we might do more music together. I think he should drop some solo shit too.

Linkan: Me and Juancan have been making music together on and off for the last 15 years but when he came with the 'Småland' beat we hadn't been hanging out or done anything in a long time. It's definitely a banger and the beat gave me flashbacks to 'Little Johnny From the Hospitul', a crazy instrumental album we used to listen to back in the day. The lyrics is some random shit, basically what was in my head at the time. Some indian food, some old tv cartoons, some politics. The hook is repping home- Växjö, Småland. I felt it would be a dope opening cut for the album and a nice introduction or re-introduction to my style.

claaa7: "SALUTE"
Linkan: That's my version of a party track haha. Its about that feeling when you've been working hard, stressing and got too much shit on your mind and gotta let it all out! Maybe I should have done a M.O.P-type banger instead but I chose the smooth tip haha... It's also a salute to my people: my girl & my daughters, my family & friends, my fellow musicians and all the people that keeps supporting us. They are the reason I'm still doing this shit and will keep on doing it til I'm finished... I think the track is quite uplifting too so I felt it was a good one to close the album and tie it all together.
Posted by lost.tapes.claaa7@gmail.com at 3:11 PM

Email ThisBlogThis!Share to TwitterShare to FacebookShare to Pinterest
Labels: interview, Linkan, side effectz