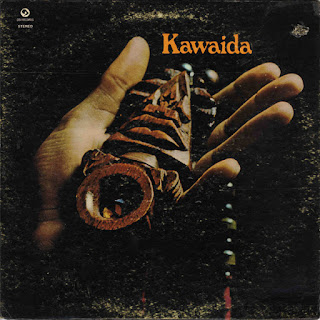 From late 2015 I've been listening to way more other types of music than Hip Hop as I feel the ratio of weak, average and appaling releases is at an all time low in the genre. I've been a true Jazz fan for almost a decade now and the high level of musicianship, the incredible chemistry between artists on a recording, and the willingness to experiment quickly made it one of my all-time favorite genres. Now, a lot of people when they hear the term Jazz they immediately have a sound in their head that they beleive it is when the truth is that Jazz as a tearm is as braod a description as Hip-Hop, Rock or anything else. Comparing Mahavishnu Orchestra to Charlie Parker (both legendary artists in their own right) is like comparing Mos Def with Young Thug or Cradle Of Filth with with Creedence Clearwater Revival. A lot of the jazz music that was created from the late '60s and up and until the late '70s especially saw loads of incredible releases that ANY hip-hop head with an open mind should be able to really dig. To me much of this music is in many ways similiar to what we love about Hip Hop as a genre. The song structures of a jazz song is usually quite similiar in that each song is introduced and closes with a "head", which sometimes also appears in the middle as an interlude, from which you can draw parallel to a hook/chorus. In between the heads you got each artist taking prolonged improvisitional solos, often in a friendly competition way, once again drawing similairites to how emcees try to make a statement with their 16 bars before passing off the mic to the next emcee in line. More than that jazz in the 1920s to 1960s (before the rock/funk/soul boom) was what the black music culture number one. Just like hip hop artists today, the jazz starts of that era was the hippest black men in the entertainment industry. As evidenced by a leader of the genre like Miles Davis collaborating with Easy Mo Bee for his last album and the seamless transition of the two genres presented on GURU's "Jazzmatazz" series is clear proof of how naturally hip-hop has grown out of the jazz tradition (perhaps more via the Soul and Funk which in turn owned equally much to jazz). Not to mention the countless Hip Hop classics that came out of sampling earlier masterworks as well as the black national pride often associated with the music. The biggest difference between the two is however a negative. The fact that, unlike with Hip Hop (and especially in this day and age), not every one could become a player. You needed to be highly skilled on your instrument, be creative and put in lots and lots of work as far as practice go. With Hip Hop today cats who has trained "cats in the hat" ass rhymes for a year can be the next big thing over a generic Trap loop that anyone could put together. That artists like Kevin Gates, Stitches, and Chief Keef to name a few is having very solid fanbase is tragic and speaks volumes of the downfall of music as a whole (this can be applied to other genres than Hip Hop as well - if you ask me, commercial music has never, ever been in such a bad state as it is now). This is what I mean when I say that I have become somewhat disillusioned with Hip Hop the last six months or so, there's just way too much bullshit and even the good ones, the underground stuff, rarely sticks out all that much.

For the first album in this series I want to put a spotlight on a very rare release from 1969 called "Kawaida" and is a theme LP put together and overseen by conga and percussion player James Mtume Forman in honor of the black power nationalist Maulana Kawaida andthe  his United Slaves organisation. At the time of recording Mtume was a relative novice on the music scene, but his connection with his immediate family - drummer Albert "Toudie" Heath and reedman Jimmy Heath he managed to get high-profile musicians like Herbie Hancock (piano), Buster Wiliams (bass), Don Cherry (bass) and percussionist Ed Blackwell to perform his six compositions. If you're familiar with Herbie Hancock's Mwandishi sextet (which is one of my all time perfonal favorite bands) this obscure release is pretty much the one that set it all off. All members were given a Swahilii name, something that would carry over to the aforementioned Mwandishi band (which besides Hancock also included Buster Williams). Though only 44 minutes in length, the album spans a large part of jazz history but is especially close to the burgeoning free jazz and fusion movements that were beginning to brew around this time. It is quite intensive and perhaps it is not the best album to start with if you're new to this genre (try "Kamili" and "Baraka" however) but I wanted to start off this section with a rather rare LP (it has yet to be reissued in its original form on Compact Disc despite the high profile cast). Check some info on the album here, lifted from Scott Brown and Clayton Carlton's Fighting For Us. What do you think of a series like this, is this something you as a reader will like to see more of? If you're a producer I can guarantee that you'll find a lot of good sample material that often hasn't been used before.

KAWAIDA
Posted by lost.tapes.claaa7@gmail.com at 3:22 PM

Email ThisBlogThis!Share to TwitterShare to FacebookShare to Pinterest
Labels: Album, jazz, jazz of the week