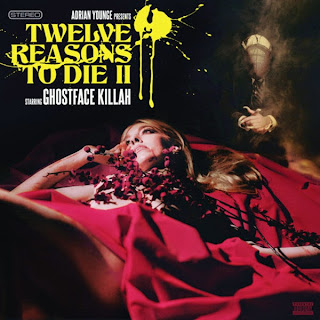 While I've heard some people put down Adrian Younge's collaboration with Ghostface on 2013's "Twelve Reasons to Die", this has always been absolutely crazy to me. You might remember that I put that album as my number one pick of the best hip-hop albums released of its year, and I absolutely loved how it all came together and the chemistry displayed between GFK, Adrian Younge and the many incredible guest emcees, and while the story was quite generic it was still a very fascinating listen no matter what and GFK did a great job conveying the emotions. So when I found that the MC/producer duo (who also includes Younge's live band Venice Dawn) has been working on a sequel to that excellent album sporting an ill tracklist (on paper) and a great cover I was hyped to say the least (i wasn't at all crazy about "36 Seasons" which was a dissapointment to me, though the BadBadNotGood joint is solid, especially beatwise).

The first single is now here and is titled "Return Of The Savage" and features RZA and Raekwon. Real Wu heads will love the fact that Raekwon, who did not appear on the first installment, is all over this baby. Check out the single below along with the official tracklist and turn that motherfucker up! Cop the album in various packages directly from Linear Labs Music store and receive it for its 10th of July release. TURN THIS ONE UP (I absolutely love this one)!!