"Ray's Cafe" is the latest release from Diggin' in the Crates emcee Omar Credle, a.k.a. OC, made in collaboration with Ray West - owner and main producer of the Red Apples 45 label. West is relatively new on the scene and has since 2009 made a name for himself through collaborations with AG, Roc Marciano, Blu, Kool Keith, and more. Throughout his twenty years long career, OC has never been one to repeat himself - each full-length release from his classic '94 debut to last years impeccable collaboration with Detroit's Apollo Brown has seen Credle reinvent himself in one way or other. Sometime in a lyrical and verbal fashion, but more often by updating his sound through the use of new producers and musical directions. This is a formula that has worked well for the Brooklynite as it makes his music hard to pigeonhole and has resulted in the vast majority of his albums feeing fresh and original. That is not to say that he only deals in perfection, but at least you can be sure that OC always got a few tricks left up his sleeve. This changing nature has resulted in several of his albums initially putting off certain fans looking for a reprise of the sound that initially made them fans. So while many of his projects initially received a somewhat lukewarm reception  they have with time largely gained in popularity (think his sophomore LP "Jewelz" from '97... Shit, even "Bon Appetit" had a lot of gems despite a few wack cuts).


But enough about the past! OC and Ray West's 2014 endeveaour for 2014 is a rather short album, sporting no more than nine tracks (including an intro). West is a producer that I feel have grown stronger and more interesting with each release he has worked on, and to me this is most likely his finest effort yet. As I mentioned before, he is a relatively new producer and its clear here that he's definitely starting to come into his own as an impressive beatsmith. Part of what makes the record work so well is the obvious chemistry between OC and Ray West which evokes the suspicion that the duo's musical relationship is based on bringing out the best in each other. "Ray's Cafe" is a loose concept album - the time is sometime during the 1970's and the place is a smokey jazz cafe somewhere in NYC where OC and Ray West is the music attraction of the night. The music really fits that description, and its definitely an album you can sit back, close your eyes and let the music wash over you and you'll see that jazz club, the stage and the band come to life behind your eyes. West's music is constructed around carefully selected samples, mainly built and arranged on smooth jazz records, with some funk and soul grooves thrown in for good measure. It's obvious that the instrumentals were created specifically for OC as they many times sound like the musical equivalent of his laid-back, introspective and reflective persona. As such it's a true joy to listen to, and O sounds very inspired by the production here, sharing stories and reflections on life, struggles, love, loss, beauty, music and so on. I personally would place OC in my top 10 of all time, and this record is simply another feather in his hat.

After a short intro the title track sets the stage for OC and Ray West as a team. As soon as the beat kicks in O takes the stage and delivers a very powerful introduction where he directly adresses the hypothetical crowd in Ray's Cafe - "I'm about to take you in the zone, in the sense of Boogaloo or Barbecue with my man Ray on the barbecue/ Miller time chillout, high times, fly dimes, not hard on the eyes, the people's like Whoa!". It's a slamming introduction set over a somewhat somber beat, built around a heavy bass line, competent but laid back drums and various sound and synth effects. It's a great way to kick things off, and really sets the mood for the entire album to come. In fact if you're not nodding your head yet, chances are that the LP as a whole will not be to your liking. The following "Have Fun" is an equally strong, but heavily stripped down, cut. The BPM is slow, in fact the drum programming is close to none, but the track rests on an especially strong keyboard hook and a barey noticable bassline. Still, the track comes off as both magnificent and addictive - especially since OC is a master of both slow and fast flows. It's a short track, and once again evokes that intimate feeling of a small but exclusive club with each of OC's word being as clear as day... And there's plenty of quotables here as well - "It's Mush, known in the rap books as O-Cizzle who's fire still burns while others tend to fizzle/ What I does, I'ma do til' my last breath/ Take advantage of life cuz you can't cheat death/ So have FUN!".

I don't intend to break down every single track, as I believe that the whole is stronger than its parts in this case and it's not a single driven project per se. However there are a few joints I'd like to mention for a few reasons. "Soul Kitchen" might be my favorite song of the entire LP, and also one of the tracks that deviates a bit from the formula. Production wise it's a more up-tempo beat that's filled to the brink with soul and is layered with various vocal samples, a slick guitar riff and a heavy drum and bass combination. The album is all about Credle and West so not suprisingly it's very light on guests. There is, however, one noticeable exception and that is "Go Back" which appears halfway through the LP. Here both AG and Milano appears, two emcees I have a whole lot of admiration and respect for, but strangely enough OC doesn't even pop up for a hook or some ad-libs. While it's undoubtedly strange, the song does manage to fit in the big picture as Ray West's inspired jazz-funk production is right in key with the other tracks and both spitters puts on an impressive performance despite it being a slight dissapointment our main artist choose to sit down out. It's a short track that works almost like a little intermission because when OC returns on Side B of the album, he does so with a venegance, rocking three of the LP:s finest moments - "Lovers", "Breaking The Rules" and "YMI" .

Overall, Ray West and OC has with "Ray's Cafe" proven to be an exceptional duo, creating a short but excellent album that should cater both to jazz fanatics and hip-hop heads (seeing how I'm both, it's not too suprising I love this). The music is constantly smooth and often laid back, and though sampled it's easy to be fooled into thinking it's actually a full live band backing OC. The cover states "Dedicated to the preservation of Jazz" and there's definitely a jazz vibe all over this, both in the instrumentals and the way OC uses his voice much in the same vein as a skilled reed player blows his sax. Too often jazz/hip-hop fusions comes off as clichés and, lets face it, boring. But jazz is just a state of mind, a musical freedom, and that is something Ray West and OC truly captures on "Ray's Cafe". I've been back and forth on how I feel about West's music but if this is the direction he's headed I will definitely keep both eyes and ears open for future material. As for OC, he's not only one of the best writers we have but the way he spits every word with such clarity and packs a flow that makes it sound so effortless is the reason he has mantained a top position everr since his debut. I'm not sure if I'd place this above "Trophies" as they are two very different albums but it's clearly in the same league. Both lyrically and musically "Ray's Cafe" got a lot to offer, and repeated listenings are rewarding; even though I heard it several months ago I haven't tired in the least of it yet. If there's one thing I want to complain about it is the decision to not include all material on the vinyl - shortly before its release Red Apples 45 made available a non-album cut called "Just Cause"  which saw OC rhyming over not much more than an accoustic guitar. To me that was a pretty powerful closing statement, and I think the album would have benefitted from including this as an outro. But no matter what, this is a really potent album that I strongly recommend to hip-hop fans all over. That it's being released on both vinyl and cassette by FatBeats is extremely welcome too of course. Support OC, Ray West and Red Apples 45 @ FatBeats.com, but thanks to DJBooth.net you can also stream the entire album for free while you wait for your order to arrive! 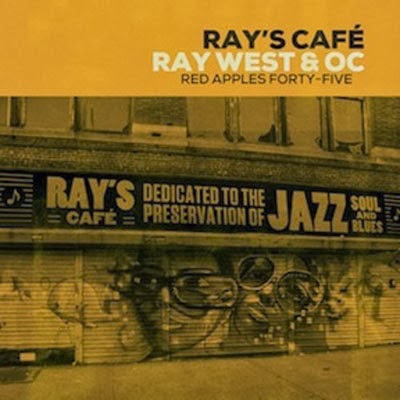