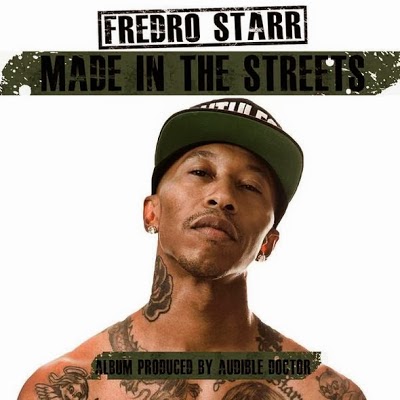 One album that I wasn't sure if I should really include in the countdown of 2013's best albums list, though musically it definitely fit my taste on all levels, is "Made in the Streets", the long awaited collaboration by the rugged voice of Onyx's Fredro Starr, and the impeccable The Audible Doctor who's already been heavily praised for another of his work on this countdown ("The Summer Tape"). The reason I had some quarrells about putting it on the list is because it wasn't officially heard until December 25 and officially released via iTunes a couple days later. However, it's such a fat ass album that it straight up knocked me on my ass when I heard it and in it's short time it was out before the New Year hit, I banged it more than two handfuls of some seriously dope LP:s released way earlier of the year. Add to that the fact that many of the album singles had previously been released starting as far back as late May, so many of the songs already had had a lasting impression on me. So I'm going ahead and including this in the 2013 list, and while the list previously has been compiled in no special order, the #5 top albums will (and sorry about being late with putting this together, but these reviews do take time to write and you must remember that The Lost Tapes is a non-profit site that I only do on the side as a hobby). "Made in The Streets" is #4 on the list, while Oddisee's previously reviewed double set "The Beauty in All" / "Tangerine Dream" makes for no. 5. So with that being said, lets take a look at why this album is so great in my humble opnion.

First off, as I mentioned several times over the past year, The Audible Doctor has really grown into one of the absolute top producers around, growing with each release; extremely rarely putting out an even slightly dissapointing beat and is able to create several styles and moods catering to the emcee he's working with (just peep the recent track he just did for 50 Cent, "This Is Murder, Not Music" for a great example). Add to that the chemistry displayed with Fredro Starr; an emcee who made his stripes with Onyx as one of hip-hop's most powerful street voices many years ago but to me started pumping out rather uninteresting music once the new millennium hit - something that is totally reversed in his work with Audible Doctor (and judging by the latest single from his upcoming "Firestarr 2" album, this new found energy is definitely carrying over to future projects), so I'm glad to be able to welcome him back to my personal highly reverred spitters. Another factor that plays in in the high quality that is maintained throughout the set, is that it is stripped of any and all filler material; with 39 minutes spread out over only 12 songs, one or two weaker tracks would obviously be harmful to the complete product, but luckily AD and Fredro has created a very cohessive album, that works best as a front-to-back listen, the way an album should. The sound and lyrical themes are often consistent, but always different enough to never become repetitious or boring.

So lets try to break down some of the songs more in depth to give a picture of what the album's greatness is all about, from both a sonic and lyrically perspective. The album kicks off with "Everyday Hell", very possibly one of the strongest tracks of the year, remininding listeners that they are in for a treat aching to the Golden Age New York hip-hop of the '90s that we all love. Fredro Starr takes on the hardships he has faced in his life and for his fellow people growing up in the rough enviroment that molded him. But it's also a celebration of breaking free and looking forward as stated in the one line hook's "It's time to say goodbye to this everyday hell". It's a truly touching track, and it's effect are really multipled by Audible Doctor's excellent production work; the center of the joint is built on a somber keys hook, a haunting vocal sample, boom bap drums, and small touches of strings. Fredro describes the sounds better than I could with his short opening speech over the beat - "You hear that? Sounds like motherfucking black clouds are coming and shit ... Sounds like the motherfucking beat is crying god." His final line before the drums and his verse kicks off, "What you know about pain?" really sets the stage for his truly virtuoso lyrical performance that follows. I seriously can't get enough of this joint... Unfortunately for those of you who have only streamed the album, a mistake caused that the official song being replaced by the instrumental, though as heard on the iTunes release the intention always was to include the vocal version as the opening track. The following cut "That New York" features a similiar musical vibe, another very down beat and somber sample collage with prominent vocal samples and smacking drums, while Fredro Starr once again spits an impressive concept joint about the New York state of mind and the Code of the Streets and what it can lead too. "This that New York, in front of the bodega where shorties drink forties and blunts with gold bagers/ Where niggas with black masks are like the lone rangers/ Running in stores, like let me hold the paper...". Once again, listening to the tracks for this review, I'm simply amazed by the amazing chemistry this duo displays at every instant, and I certainly hope we will see much more music from this team in the future.

"This Ain't My Day" switches things up a little bit by keeping things a little lighter although the beat knocks hard as fuck with it's knocking drum programmiing, incorporated synth lines, horn samples and powerful bassline. Fredro goes in like the vet he is, doing a kind of opposite to Ice Cube's classic "Today Was A Good Day", describing everything going wrong that possibly can go wrong in a day. And wherever you grow up or what experiences you have, you can definitely relate to that. There's some funny lines here as well, though they are spoken without an ounce of irony which makes them even more hilarious. My favorite one being "Momma told me there would be days like this, when you ain't even got enough trees to blaze one spliff". This is followed by the single that set it all of back in May, and had me anticipating this album like fucking crazy - "Holding It Down", featuring DJ Make'Em Pay. Listening to this you might think you're intense headnoding broke your neck and you are in boom bap heaven. Small vocal sample that runs in and out, a triumphant keys and horns combo and a powerful rhythm section, and taking the joint to the next level is the intensely powerful scratching by DJ Make'Em Pay made up of several classic Big L lines. I've said it many times before that in my opinion, scratching almsot always make songs of this nature even better so I'm glad the duo recognizes this while so many of their peers have seemed to forget the once so important role of the DJ. This concept is visited again on "Ain't No Other Kings", which shares the same majestic and triumphant Audible soundtrack where Fredro with all rights uses his remarkable flow and witty wordplay to create one of the few tracks on the album where he boost up his own performance, status and longevity in the game. Add to that DJ Nelson's highly charged turntable magic, using a classic BIG line to get the full effect. Interestingly enough both of the DJ apperances choice for scratched material makes use of two of the finest fallen soldiers from the second Golden Age of NY hip-hop, further solidifiying the theme of AD and Fredro taking it back to their roots and paying respect to the fallen soldiers of the era.

The last joint I want to mention here is the album closer and title track (although it's a remix and I have no clue if the original has even been released). The reason I want to put a spotlight on this is because it's such a perfect closer to end a perfect album. While much of the album is kind of downbeat in both it's lyrical themes and the accompanying production, the final song is more up tempo and add a much needed glimmer of hope that's just perfect as the outro. Fredro Starr rhymes on how he is made in the streets ("I'm just what the hood made me, I'm just what the block made me, I'm just what the streets made me, I'm just what the cops made me, I'm MADE IN THE STREETS!!"). But don't be fooled as it's definitely a celebration of his life up to this point, in a you have to know where you come from to know where you're going kind of way which also resonates back to the first tracks "It's time to say goodbye to this everyday hell". This celebratory vibe is amplified by Audible Doctor's production, who here offers the album's most up-tempo and positive sounding track, which is straight up beautiful on all levels; even creating a sort of catharisis when listening to the album in full.

Damn, I really feel that I could probably break down every track on here, but instead I encourage you to listen to the record if you haven't already as it is truly amazing. If I were to put a rating on it, I without a doubt say it's a 4.5/5 album.. However, since I haven't had as much time with this album as the other LP:s on the list due to its late release date, I can't testify to it's replay value but I do strongly believe that this is an album that will last for a long time. The only thing slightly dissapointing right now, is that it's only available in digital format and such dope music definitely deserves to be pressed up on wax or at the very least CD. I really hope the duo somehow will make this happen as I without a doubt would support it in a heartbeat, and I bet a lot of dedicated peeps with me, Take a listen to the album here, and if you like what you hear, please support the artist by putting up the $9.99 for this remarkable album @ iTunes. And for the love of GOD, don't forget to TURN IT UP!!!
Posted by lost.tapes.claaa7@gmail.com at 6:54 AM