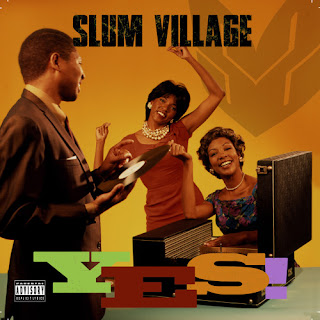 When I first posted the free album stream of the new Slum Village album I was a little stand-offish against it. Their last album "Evolution" was really weak to me and din't pack the SV sound at all, "Villa Manifesto" was good but it seemed to lack something and I've heard several singles "produced" by Jay Dee that I wouldn't imagine he wouldn't want to have released during his lifetime. Then there's the constant changing of the line-up of the group. So needless to say then, I want into SV's new album with a lot of precautions. That's really the best way to enter any album, because then you can only be pleasantly suprised. And that is exactly what I became with Slum Village's new "Yeeeah". In my opinion this is the most Slum Village sounding album the group has released in year, which is something of an oxymoron considering that they have embraced several styles during their long careers and member changes. But what I mean it is the closest they have come to the style that made me fall in love with their music from the jump, the "Fantastic Vol. 1" and "Fantastic Vol. 2" series. Sonically it's filled with that filtered basslines, smacking Dilla type drums, and sampled guitar and Rhodes samples. This is what I want to hear from Slum Village, and not suprisingly the album uses no less than 10 Jay Dee instrumentals that at least I never heard before. And the mistake many albums that uses posthumous lost-and-found beats for their albums, these have been co-produced by Young RJ in several cases making sure that they sound as complete songs presentable in 2015 - which is a great way to keep Dilla's musical legacy alive. I'm really fed up with the practice beats some artists, who never even worked with Yancey in his lifetime, get a hold of and boosts about having a Dilla beat on their album. But these aren't just any ol' Dilla beats either, they actually are in the same vein as the "Fantastic" stuff for the most part, really bringing back memories of when SV was the kings of Detroit.

And just like "Fantastic Vol. II", the current members of Slum Village, which still includes their leader T3 who does a great job rhyming throughout, the members aims several joints at the girls over smooth instrumentals. A true stadout is the Young RJ produced "Push it Along", that uses a familiar breakbeat coupled with an infecitious piano melody and a brilliant bassline while Phife Dawg makes a welcome guest apperance. Then you got the triumphant "Windows", filled with strings and smacking drums giving it a cinematic feeling that's perfect for the songs themes of how we all see small parts of other persons life through "windows" just like on a screen. This is one of the beats Jay Dee begun and Young RJ completed, and this is when it works best. The same can be said about their collaboration on "Right Back at You" which features the legendary De La Soul which got that classic posse cut feeling with nothing but excellent verses from everyone involved over an infectious piano sample, hardcore drums courtesy of Dilla and slick cuts. Same goes for the Black Milk produced "We On The Go" which features Frank Nitty and a verse from Black Milk himself going head to head with the SV trio over an addictive banger with a lot of shit happening in the beat that together forms a unified whole. The only real misstep on a really good album is the halfbaked Jay Dee left-over beat that for some reason was released as a single and is even the title track. It got a disco influence and a horrible singing hook and doesn't even sound finished. Why Young RJ didn't go into this one and shape it up is beyond me because it just don't work, but I guess some people like it so whatever.

Lyrically the album doesn't say much, but SV really never did speak on very important topics, they got cool voices and just like on the "Fantastic" albums this one got a laid back feel with a lot of joints aimed at the ladies (like the beautiful "Too Much") when they are not making Detroit anthems ("Where We Come From") or going full throttle with the posse cuts. After roughly forty minutes, the album closes on track 12 with the excellent Jay Dee production "What We Have" featuring Illa J (I actually thought he was a member by now, but guess not) and Kam Corvet. A fantastic way to close the album, an experimental Jay Dee beat taking some notes from his love for jazz with Rhodes, percussion, trumpet and female vocals floating in and out over the heavy filtered bass line while T3 sends out his love to a woman he sees a future with but his homies don't see what's the big deal with. Something I guess many of us can relate to. As the album fades out, there's no question that you have listened to a new Slum Village album, unlike some of their more recent releases. And for once I'm actually glad they used leftover Dilla beats because they found a way to really make it work without sounding forced. When Baatin and Dilla died  I counted out SV, but then when I realized what a dope emcee eLzhi is I noticed that they could still make some dope shit but since he left the group I have had zero interest in a new SV album. I'm glad they proved me wrong because they still got it! Motown stand up!

Posted by lost.tapes.claaa7@gmail.com at 5:40 PM