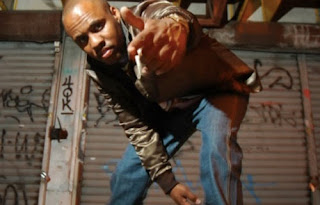 If you're a fan of one of the most groundbreaking acts in hip-hop's history, A Tribe Called Quest, you should definitely be familiar with Consequence (who is in fact Q-Tip's younger cousin). He first appeared with the group on a 12" only version of "The Chase" (from 'Midnight Maurauders') but it was with the groups fourth, and heavily underrated, album 'Beats, Rhymes & Life' where Cons' actually provided vocals for 7 of the album 15 songs, including the hit-single "Stressed Out" with Faith Evans. At the time many people were dissatisfied with the amount of apperances from the young rapper, and it's quite clear that he hasn't fully evolved into the rapper he would become further down the road. Possibly due to this critiscism Cons didn't have any verses at all on ATCQ's fifth and final album, 'The Love Movement', but there's no question he was still a part of the groups extended family. Around the same time Q-Tip and Ali Shaheed had started their own record imprint named Sound Museum, a sub-division of Elektra Records, and Consequence was the first artist to be signed to the newly formed label.
Somewhere between 1996 and 1998 the rapper recorded and completed an album etitled 'Hostile Takeover', working with producers The Ummah (Q-Tip, Jay Dee, Ali Shaheed Muhammad), 88 Keys and Mobb Deep's Havoc. "Believe me when I tell you that this album would have been an insta-classic had it ever seen the light of the day" is a quote from 88 Keys who shopped his first two beats ever to the project (one of them which is being represented on the downloadable EP below). As Tip's relationship with Elektra CEO Sylvia Rhone started to become strained the Sound Museum label eventually faded into non-existance leaving Consequence's album ultimately shelved and it still remains unreleaesd. Besides a few dodgy vinyl bootlegs the majority of the album will probably never be heard but as Cons is now signed with Kanye West's G.O.O.D. Music and gearing up for a new mixtape ('Movies on Demand 2') and his second official album, 'Cons TV' I thought now is a good time to share this little EP of tracks from the unreleased LP which features vintage late '90s production by Q-Tip, Dilla, Havoc and 88 Keys. Enjoy and leave a comment if you like it!
01. "Consequences" (Ft. Q-Tip)
02. "Armani Frames (Riot)" (Ft. Busta Rhymes)
03. "Weekendz"
04. "Rock N Roll"
05. "Get The Money" (Ft. Havoc)
Consequence - "Hostile Takeover EP" (1998)
Posted by lost.tapes.claaa7@gmail.com at 2:47 AM