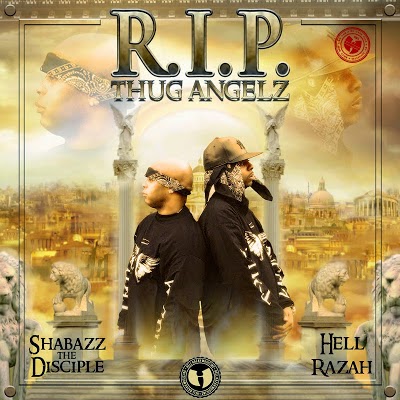 Back in 2008 original Sunz Of Man members and Red Hook, BK residents Shabazz The Disciple and Heaven Razah formed The T.H.U.G. Angelz. An acronym for Those Humble Under God, the duo bonded over spiritual music that exposed the tough life in the ruff neighborhoods around them without gloryfing the horrors. The powerful chemistry of this duo had already been showcased on a handful early underground bangers as part of the Sunz (including "5 Arch Angels", "Deep in the Water" and "Writin' Rhymes With A Liquid Pen"), it was first during the late 2000s that fans would be able to experience just how incredible these two sounded together. Since hearing him on "Diary Of A Madman", I've personally held Shabazz The Disciple to be one of the illest and most underrated emcees of all time. Few, if any, other emcee can conjure up such deep spiritualism within his lyrics while also coming strapped with a real raw, hardcore street edge. Add to that the fact that Shabazz is an extremely strong storyteller, as he has proven time and time again and you pretty much got an artist with the whole package. Hell Razah is a perfect compliment to 'Bazz aggressive rawness as he's more soft spoken, with a lot of knowledge built into any which verse, often presented in a reflective, almost nostalgic pretext.

In 2008 they hooked up with BabyGrande and released "Welcome 2 Red Hook Houses", an overlooked thirteen track set featuring some absolutely outstanding records such as "The Orbituary", "Audiobiography Remix" and "Welcome to Red Hook". Prior to the release of that album word on the T.H.U.G. Angelz project was that they were working exclusively with super producer Ayatollah, who suprisingly didn't have a single credit on the aforementioned CD. The chances of getting to hear the mysterious Ayatollah collaboration that the duo obviously had worked hard on seemed to die when 'Bazz and Razah had a public falling out and vowed to never work with each other again. A true shame! Luckily the story doesn't end there as Hell Razah has decided to release the entire project as a free download for the fans. Featuring 13 songs plus some additional bonus tracks, this is some pretty damn dope shit right here. Ayatollah (who I think is responsible for the vast majority of production on tracks 1-13) does a good job with the soul samples, and like true street poets The T.H.U.G. Angelz builds true Soul music by injecting their lyrics with pure emotion and pain, sprinkled with wealth, health and knowledge of Self. WINGZ UP!!

“On behalf of Hell Razah Music, Inc. & GGO Chapters across the globe we invite you to enjoy the music and continue to support & pray for our founder and President Heaven Razah as he continues in his recovery  and music endeavors.” - Queen the Prophet (Ghetto Govt Officialz 1st Lady)