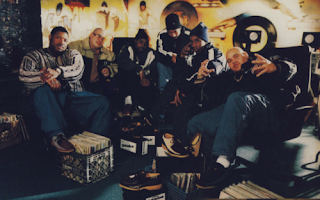 For the last couple of months we've been getting loads of new tracks under the D.I.T.C. name as well as the promise of some sort of a new album on Slice-Of-Spice has made headlines. Over the last ten days two new songs has been uploaded to the official D.I.T.C. Soundcloud, making the total of leaked songs to seven (excluding the dope David Bars joints). This indicates to me that many of these are more teasers than actual album cuts which to me is a promising fact that the majority of the tracks are dope but perhaps not up to the level we have come to associate with the Diggin' brand.

The two latest songs are called "Get With The Program" and "16 & Out", respectively. The former is a OC solo joint in the vein of the previous "My City" though the production this time is handled by relative newcomer Duck Dodger. The latter is a guitar heavy boom bap interlude with AG (rhymes) and Lord Finesse (beats). As the title indicates it's only a strong 16 over a solid beat but it might still be my favorite out of all the singles released so far. This is the type of vibe I'm looking for on a new D.I. project. Big up to the crew for this one!

Posted by lost.tapes.claaa7@gmail.com at 3:39 PM