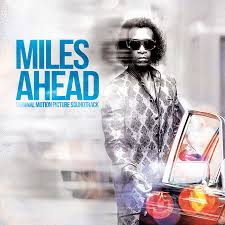 A couple years back Don Cheadle finally got the go-ahead to produce, star and direct in his long-time dream project, a surrealistic biopic on the lives of Miles Davis, more fiction than fact and titled "Miles Ahead" after his famous 1957 collaboration with composer extraordinaire Gil Evans. With full cooperation from the Davis estate he was free to use the original music of the portrayed star (something that has hampered biopics badly from the Andre 3000 version of Jimi Hendrix story to the more recent Chet Baker flick, "Born to be Blue", which incidentally includes two key scenes with M.D.). Not only had Cheadle permission to use the music as he saw fit, he was also able to excerpt it and cut it up to better flow with the movie - and let's face it, if he was to include all those amazing 20 minutes tracks in full there wouldn't be much of a soundtrack to talk about. The majority of the released film music is made up of such timeless excerpts from our heroes vast catalouge, including brilliantl, and tastefully shortened, classics like "Sivad", "Nefertiti", "Agharta Prelude", "Go Ahead John", "Black Satin" and "Solea". While the movie avoids following a linear narrative the soundtrack starts with the earliest song included, the title track, and then the music is placed in chronological order with most of the musical action taking place during Miles' fusion years (1968-1975) as that's around the time most of the movies action take place. However if you, like me, already own just about everything Columbia ever released of the man, including bits and pieces, somewhat dodgy live recordings and what not, you might not be too excited. But it has a nice flow to it, is interspersed with appropriate vocal clips from the flick, and as it is placed in chronological order it gives a nice overview of Miles, the ever-changing, daring artist going from place A to place B to place C to Musical Dark Nivana before his total breakdown in 1975. If you're new to Miles and maybe jazz in general I would say that this collection is a better place to start than most other similiar one disc selections. For one it's put together by a true fan of the music rather than some exec trying to pump out some more money by yet antother greatest hits collection, as mentioned above it gives you the chronological oversight which allows you to hear multiple styles (with Miles it's never a given that you're not gonna hate point B even if you love point D - at least not at first), and last but not least it features key cuts from what many would consider to be the epitome of this artists genius years.

The actual score for the film was however provided by Robert Glasper - a brilliant pianist, producer and jazz artist in his own right, and one of the few who keeps the artform alive and exciting by allowing it to change and take risk (unlike someone like Wynton Marsalis, no matter how talented). For this soundtrack Glasper had the right understanding of what was needed and through proper respect for Miles and the filmmakers he was able to channel the spirit of him while gathering up talents as diverse as they are from different generations. Included on the four tracks that are also included on the soundtrack are the young bass wonder Esperanza Spalding, Pharoahe Monch, Herbie Hancock, E.J. Strickland and Wayne Shorter. With one exception the modern Glasper cuts are placed at the end of the album and as ahead Miles was back in the days, you won't even notice a very modern/old transition thing going. The soundtrack come highly recommended both for established fans of the trumpeter, but even more so for those more unfamiliar and curious as well as Glasper's loyal fanbase. Shit either camp need to hear this for the beautiful album closer "Gone 2015" where Robert Glasper's soulful production and keyboard grooves creates a sharp feeling of triumph, strongly underlined by young trumpeter Keyon Harold's channeling of Miles' sound and the excellent verses by Pharoahe Monch. You can buy the album at iTunes or Amazon here. 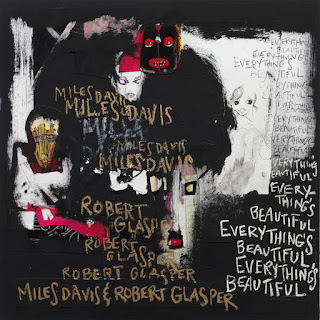 Robert Glasper's experience with Cheadle in "Miles Ahead" and especially the estate had a huge impact on him as a life long fan of Miles Davis. Like Madlib when he produced his classic Blue Note remix album "Shades Of Blue" the producer/pianist got full access to the Columbia vaults for whom Miles recorded under exclusive contract bween 1956 and 1986. Although most of those tracks that were once rare have since seen official releases on expensive box sets, it sets the album apart from your average remix scavenger assemly as Glasper could manipulate the actual channels and so forth. An interesting point is that he uses a lot of Miles' voice, that famous raspy whisper, taken from various studio sessions and in-studio jams - allowing fans the relatively quiet musician to hear more of his voice than on any other previous M.D. project. But perhaps the most important aspect to know about "Everything is Beautiful" is that this is a Robert Glasper album in all but name, despite Miles' top billing. The LP's theme is of course Glasper's theme of the music and spirit of Miles, something that I think he sometimes manages to capture and sometimes not, as it's built around samples of the man and his music. But that does not mean that you will hear Miles' beautiful trumpet sound on every song, in fact it's really only on "So Long (Maiysha)" and ONE MORE that we get that and though it's unique it kind of feels like being shortshifted. But it's not only Miles and the trumpet that takes a back seat, Glasper's role as a firs rate jazz pianist is minimized as well as he really only gets to stretch out on a couple of pieces. Instead he is fully attacking this project as a producer, picking the samples, making sure the guests does what they are supposed to do and gets the right track to work on, makin sure the vibe of Miles Davis is to be found all throughout the LP's 50 minutes, and so on.

For me Glasper is a unique artist that is hugely talented but we doesn't always see eye to eye on what a dope album from start to finish is. I liked "Black Radio" and "Black Radio II" quite a lot, but there were definitely tracks that I felt brought down the intensity of the overall product. The best thing in the "Black Radio" series for me is without a doubt the six song EP "Black Radio Remixed" which is just pure excellence from start to finish. And I kind of feel that the same thing is happening with "Everything is Beautiful" - some tracks really gets the jonez in my bones; the wonderful light bossa nova Miles on wah wah / Erykah Badu duet that is "So Long" (a new rendition of 1975's "Maiysha"), the gorgeous Phonte collaboration and first single "Violets" where Glasper makes a beautiful hip-hop vibe soul joint based around Bill Evan's timeless chords from "Blue in Green" that works as a tremendous musical canvas for the ever innovating Phonte. The opener "Talking Shit" is beautiful because it is three minutes of studio outtakes from false starts that features Miles getting on drummer Joe Chambers' case about coming up with a beat more aking to what we today know as Hip Hop. It's definitely fascinating, and naturally leads into Glasper's hip-hop tinged version of that track Chambers and Davis was working on in '69 - "The Ghetto Walk" (originally titled "Ghetto Walkin'") and with the smooth vocals of Bilal riding on top of the fat groove I feel that Miles would be proud. of what the producer has come up with here.

However as a tribute to Miles Davis I think aside from the songs mentioned above it generally fall shorts. Oh wait, there's one mighty groove featuring Miles' spitting adlibs under singer Ledisi's hook ("wait a minute, wait a minute") while a pulsating funk headnodder is highlighted by the excellent electric guitar work of former Miles' sideman John Scofield who does his best to bring back the mid-'80s period where he worked with the man on stages and studios around the world. And this to my mind is where the project goes somewhat misguided. Miles' sideman, which features the absolute elite in jazz, pretty much all had the highest respect for their former boss and bandleader and while Glasper's songs on the "Miles Ahead" soundtrack featured Wayne Shorter and Herbie Hancock, Scofield is the lone sideman featured here. Hence using artists like Laura Mvula, Hiatus Kaiyote, KiNG and Georgia Anne Muldrow (who's rendition of "Milestones" is decent) instead of fusing the old with the new by inviting Dave Liebman, Sonny Fortune, Jimmy Cobb, Chick Corea, Wallace Rooney, Jack DeJohnette, John McLaughlin, Lonnie Liston Smith, and so on, really feels like a missed opportunity. It's not a bad record per se, but it's not a great one either - though it has it's share of great moments. I won't be purchasing it, but give it a listen it might be more up your alley as many critics seems to love it at the moment. "Everything's Beautiful" is available on vinyl, CD and in digital formats via Amazon among other sites.
Posted by lost.tapes.claaa7@gmail.com at 7:46 AM