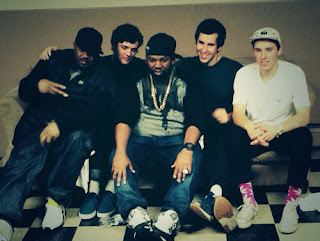 As you, my trusted reader, very well know I'm a borderline Hip Hop and Jazz aficionando, and though my love for jazz mainly lies with the older legends like Miles, Coltrane, Herbie Hancock, Chick Corea, Sam Rivers, and so on, there's a select few young players that I still find makes excellent music that keeps pushing the music forward which I really love. Robert Glasper is the first that comes to mind, given his vast knowledge of what came before, his love for and ability to fuse other black genres in a convincing manner. But there's also cats like Terrace Martin, Kamasi Washington, Ravi Coltrane and a bunch of others holding down tradition. And then there's BadBadNotGood - when I first came across them I was weary of them as a jazz band to be honest. For one they look like high school kids, and while apperances shouldn't matter, if we are all honest with ourselves I think we'll find that things like this do have a bearing. And then they were associated with Odd Future whom I don't got much love for. So it was first when they started collaborating with people like MF DOOM, Wu-Tang Clan, Talib Kweli and especially their excellent work on Ghostface's "Sour Soul" album a year or two ago that really opened up my eyes. These guys are all good players despite not being close to true virtuosos. But it's their love for and ability to combine hip-hop elements with traditional jazz elements (or mainly jazz fusion styles to be fair) that really sets them apart and make them a crew to look out for. Much of their music has been produced by themeselves but as on "Sour Soul", "Rivers of Blood", Danny Brown's "Float On" it's when they are collaborating with the excellent Frank Dukes that the most interesting and professional sounding work tends to happen.

BadBadNotGood is a trio representing Toronto, Ontario and works in a classic jazz quartet constellation while using mainly electric or amplified instruments. The group consists of Leland Whitty on Saxophones (who was the last member to join), Matthew Tavares on keyboards, Chester Hansen on bass and Alexander Sowinski on bass (accoustic and electric). The group met at a college for jazz studies and realized they shared a common love for Hip Hop music as well as jazz and when deciding to form a band wanted to interpet hip hop tracks in a jazz setting. This was realized on their first full-length, the digital release "BBNG 1" (2011) where they covered classics and newer material in a trio setting by artists like A Tribe Called Quest, Gucci Mane, Slum Village, Gang Starr, Nas, Ol' Dirty Bastard and many others. You can check out the full album @ the BBNG Bandcamp. This album caught the attention of a lot of artists, including Odd Future, but to my ears more importantly it was when they caught the ears of RZA who included their production and instruemtnal skills for two tracks on his somewhat overlooked soundtrack to "The Man With The Iron Fists"; co-producing and playing on two songs ("Rivers Of Blood" / Wu-Tang Clan Ft. Kool G Rap and "Sex as a Weapon"

Following their first album, "BBNG #2" introduced new member, reedman Leland Whitty and it's here I feel that they really and truly came into their own as an excellent jazz ensemble. A piano trio (which is one of the usual jazz constellation and consists of bass, drums and piano with the pianist holding down all or most of the solo parts) only really works when all three of the musicians are absolutely excellent, but when bumping up the members to a full on classic quartet the circle was cose and some truly exceptional music was starting to get produced. Another important factor was the inclusion of their main producer Frank Dukes who has produced much of the guys' work since. One of their most recent projects was a full-length collaboration with Ghostface Killah and producer Frank Dukes called "Sour Soul" which received rave reviews from many publications and especially production wise they created an absolutely incredible soundbed for GFK to spit his knowledge over.

I wanted to make a compilation of some of these guys excellent work, possibly it can put on a few more on them as they deifnitely deserve it. Jazz is not dead - the jazz of old perhaps (though all those classic records will live forever), but there's lots of artists out there still making very interesting albums. That and the fact that these young guys have impressed me immensely with much of their material so be sure to keep an eye on them if you feel the same way, check and support for new material at the Bandcamp link above and sites like The Lost Tapes. But right now I just want you to sit back, let that volume bump and shake your head to this sick shit. And while you're at it be sure to cop the aforementioned Ghost / BBNG album from LEX if you haven't already, a very good album no doubt. 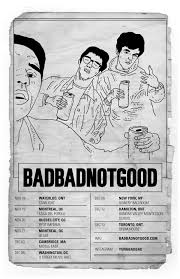 BADBADNOTGOOD - "BadBadMeaningGood"
Posted by lost.tapes.claaa7@gmail.com at 12:22 AM