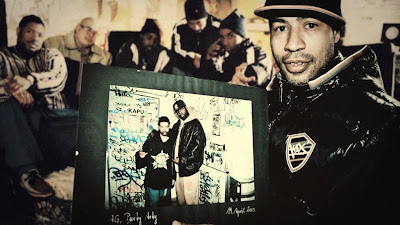 It's been quite a while since I updated this blog as I'm sure you know- The thing is that I don't have the passion to continue do daily updates for a few reasons. No. 1 I barely listen to hip-hop at the moment (it's all about jazz like the Mwandishi sextet, all Miles Davis, Eric Dolphy, Coltrane and so on); No. 2 I still check for new hip-hop but i don't feel that there's been much music up to par recently; No. 3 I have been employed as a full-time librarian so the time is quite precious. But besides that I'm letting the site be up throwing some ill updates every once in a while.

My first thought was to make a D.I.T.C. blog/website and since the start of The Lost Tapes I don't think I missed any new shit from the Diggin' crew as well as posted interviews by Diamond D, Buckwild and E-Blaze. 2014 and 2015 brought us plenthy of dope new releases from Lord Finesse, Showbiz & AG, OC (with Apollo Brown) and most importantly the Slice-Of-Spice sponosred "The D.I.T.C. Remix Project" which featured incredible modern takes on some of the D.I. classics updated by some of the finest proudcers around (it even included a previously never before heard Big L verse on Finesse's "Thick" mix - is this the original?). A while back D.I.TC. dropped the news about an upcoming brand new album and dropped some ill snippets and a single or two on their Soundcloud.

Since then they have posted a brand new track each and every week, featuring all living members of the crew - including a slamming Fat Joe verse on the guitar heavy boom bap monster "Rock Shyt", also featuring Lord Finesse (first verse in a decade) and Diamond D. You got a short AG banger produced by Buckwild, several heavy OC joints, D.I.T.C. fam member M. Gage getting busy over Showbiz productions, the soulful O & A collabo "16 & Out" which Lord Finesse truly blessed with that boom bap we all love., If you open the Soundcloud page and press play on the first song you'll be able to hear all uplaoded tracks in chronological order - creating somehwat of a new D.I.T.C. mixtape so don't fucking SLEEP!

D.I.T.C. STUDIOS - THE SOUNDCLOUD TAPE
Posted by lost.tapes.claaa7@gmail.com at 1:12 PM