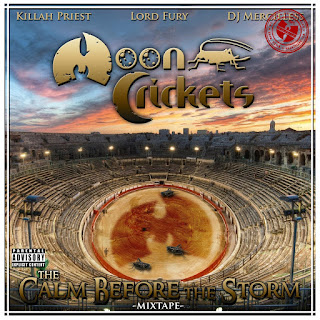 As I said in the previous post it's a real chore sometimes ot wade though the immense discography of Killah Priest; there's official albums, there' semi-official albums, there's bootlegs, there are collaorations and so on and so forth - in other words it's a bit of a jungle. One thing's for sure, with the exception of KRS-One perhaps, there's really no truly gitfed MC with such a high putout that actually consist of such a high quality material discography. Almsot simultaneously with the Vendetta King groupng, Priest has also taken part as a member of a new trio called Moon Crickets which features himself, Lord Fury and DJ Merciless (who also handles all the beats).


The mixtape is titled "The Calm Before The Storm" which is hinting that we are going to get a full-length album from this guys probanly sooner or later and here's a hilarious vido series of in studio footage from some of the sessions featuring the three core members and close core collaboatorx John. The mixtape featuring some very dope jams, all produced by DJ Merciless who strikes a fine balance between the spiritua and esoteric and the gritty hardcore rhyme schems from Priest, Lord Fury and guests like Tragedy Khadafi, Timbo King, Shabazz The Disciple, Hell Razah, Junior Reid, Hell Razah and more. The forthcoming album will most likely feature several Ghostface verses since the short video podcasts revelal him sitting in on a large number of studio sessons. Stream and/or download the project via Audiomack below. Album coming soon.