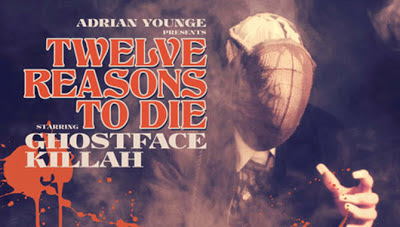 Apollo Brown and Adrian Younge has done it again... Ghostface Killah has done it again... Wu-Tang Clan has done it again. Every time you think you got these guys figured out, they come with something totally mindblowing like "Twelve Reasons to Die". When I heard Adrian Younge's production of the original album I instantly crowned it the best album of the year. However, it would only be a month later that Detroit's current beat monster #1 (sharing that spot with Black Milk) released his own interpreation of the latest offering from Ghost, featuring all of the original, outstanding vocal performance, in a completely untampered way; leaving even the sequence in tact. But while Younge's take was based around live instrumentation, taking his influences from early RZA beats and the legendary scores of Ennio Morricone, Brown's route was something else. His trademark record hissing is evident on every track, the agressive, almost threating  rhythm tracks are in full effect and so is an array of slowed up and fast-paced vocal clips. All of these elements sound right at home under GFK's violent lyrics, but the most striking difference is that the music are without a doubt that it is all 100 percent sampled; putting the emphazis on the East Coast boom bap hip-hop we all grew up around and love like our families. With both versions clocking in at just under forty minutes, neither version ever gets boring, never gets stale or drag on. In other words, this is exactly what hip-hop should sound like - matter of fact it's Apollo Brown's best album so far if you ask me. And though I only heard his collaboration withh William Hart and The Delphonics,


The tape works great as background music but it's true brilliance really becomes evident when you sit back, close your eyes, and hang on every single word, beat switch and note that creates the coming rty minutes. A lot of albums are simply masquearding as concept albums, but "Twelve Reasons"/"Brown Tape" is the real deal, no question. From "Beware of the Stare" to the final showdown on "The Sureshot" the vocal, all the time while brilliant music play out like a violent mob movie for the blind. It got it all, plenty of great supporting characters, a charismatic leader, varied backdrops/sets, suspense, a ghost story, a  love story, revenge, and so forth... It's definitely a movie on wax and based on its contents, what more could you possible ask for?


"Twelve Reasons" reminds me of the Wu-Tang Clan in their heyday; sure, it's a Ghostface album, just like "Ironman" was or "Cuban Linx...." was a Raekwon LP, but in a sense it's a real Clan album as well - Inspectah Deck, U-God, Masta Killa, Killa Sin, and Cappadonna fequently appears  stunning verses that brings a lot to the story arc, while yet Another dimension is added with The RZA narrating the project. Another thing that harks back to the early days of "The W" solo is that all music is handled by one producer solely; Adrian Younge which with his live band creates a very cohessive sound for the original version while Apollo Brown and his MPC manages to create a soul-infected, funk oozing musical journey. It's hard to choose which version is better (I usually play both front-to-back after the other) because they are both the same and very different chambers at the same time. Eiither version supplies a perfect frame for Ghostface's rise in the criminal underworld, to him being murdered only to rise again and unleash a large can of bloody venegance on the fictional DeLucas family, A lot of concept albums are way too lose to be called concept LP:s, but as Ghost is known as the #1 storyteller of the rap game if there's someone that can pull it off a 100 percent, it's certainly him. A fun fact that we can thank RZA for, is that GFK's voice again sound like the Ghostface we fell in love with between '92 and '97. The reason is that RZA Always had this idea that Coles voice need to be slightly lower pitched, and I completely agreel.


Tracks like "Rise of the Black Suits", "Blood On The Cobblestone", "Enemies", "The Sure Shot Pt.s 1 & 2" are without a doubt some of the finest cuts of the year, and whether you prefer Younge's or Brown's respective interpretation of the alnum simply comes down to a matter of your musical taste. Personally I think "The Brown Tape" has a slight edge partly because the brilliance of letting an insanely violent joint like "Murder Spree" or ""I Declare War" be accompanied by a beautiful, gospel/soul sounding cut with a sped up but laid back vocal groove. I can't wait to see what's next in line for Ghostface, Adrian Younge, RZA's Soul Temple Recods and Apollo Brown, because all four has just put out their finest release so far (the best for 10-15 years for GFK). Make sure to support this, one way or another - Head over to SoulTempleMusic.com.
Posted by lost.tapes.claaa7@gmail.com at 3:04 PM