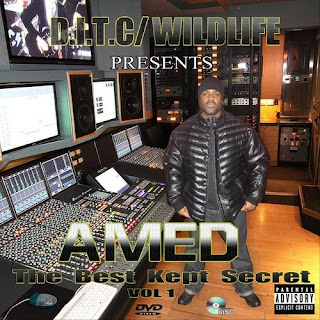 Amed has been down with the D.I.T.C. crew since way back in the early days and on his best days he can produce a hard boiled banger that knocks as anything by Showbiz or Lord Finesse. Amed originally went by the name of (DJ) Timbalan and started rapping in the late '80s, which led to DJ:ing and then eventually producing. His first major credit was for his work as a turntablist with Freestyle Professors and Show on the classic F.P. EP "Your Pockets Been Picked". He next made an early apperance as part of a compilation showcasing the D.I.T.C. family on an at the time untitled compilation album which was to be released in early 1995 (you can hear AG mention it in this Yo! MTV Raps interview). What was completed of that album was however shelved and didn't find its way to the publics ears until 2008 when Show put it out as "Unreleased Production (1994)". The unfinished album featured two songs of Amed rapping along with a cat called 40oz who has since dissappeared altogether from the scene. One of the tracks ("Down For The Crown") also features his production, making it the earliest known released beat by the man. This might have been around the time that he really found his interest and knack for producing which made him leave his microphone tactics behind and start focusing entirely on his production work, heavily inspired by his fellow D.I.T.C. alumni (especially his close companion Showbiz) while giving it his own unique spin.

Since 1998 he produced the classic group single "Time to Get This Money" which featured on point verses by OC, AG, Diamond D, cuts by DJ Premier and a headbanger boogie type boom bap beat that was very memorable. Since then he has been used as kind of a secret weapon, not producing or at least releasing too much, but whenever his name is attached to a record you can count on it being DOPE. He made his mark producing bangers for Grand Agent, Ghetto Dwellas, Show & AG, Mykill Miers, and two of the best cuts from AG's first solo outing ("The Dirty Version"). The highest honor he could get from his peers came when his beat was picked for the backdrop of the 1999 Big L tribute track on "Worldwide", a somber, reflective yet relatively hard hitting song that really sets the tone for AG, OC and Lord Finesse's heartfelt verses for their fallen comrade. Other work around this time, his most prolific period, included several songs for Milano who was by then a new artist and their collaboration "Rep For The Slums" still stands as one of the emcees best known tracks. To this day he is still working closely with Milano and a joint album has been in the works for quite some time by now. Very importantly he was also a major player in the extension of D.I.T.C. and it's extended family in to Wild Life Entertainment circa 2001, producing many of the 12" singles at the time. What many don't know however is that Amed told me that he was the one that started Wild Life in the first place and that he had been repping it all the way back since 1989 when he started getting serious about his work as a musician.

Amed is a man who likes to work in the shadows and even many dedicated Hip Hop fans aren't even aware of his name, though definitely his work. Add to that the fact that he got snubbed for the credit for "Pain", the hands down best song on OC & AG's collaborative "Oasis" LP back in '08. With this in mind it's only right that The Lost Tapes put a spotlight on this man and all the work he has put in throughout the years. Although Amed's name hasn't really been attached to a D.I.T.C. project since the aforementioned track and "The Movement" compilation I really hope we will see more of his work on the upcoming group album on Slice-Of-Spice. Though his name hasn't been attached to very much since, he was heavily involved in Milano's "The Hurt Locker" mixtape and had a very dope placement on an album by Delta called "Pyramid Schemes" (stream their collabo "Missing Link" above). While we wait for news on that I thought it only right to bring y'all a compilation of some of my favorite works of Mr. Amed, featurng a combination of some of his lesser known works as well as some of his most recognizable tracks - spanning 1994 to 2008... So let's get busy and dig in the crates! Oh, and don't forget to turn that shit WAY UP! 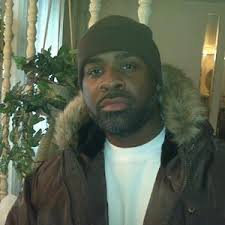 AMED - "The Secret Weapon"
Posted by lost.tapes.claaa7@gmail.com at 9:36 PM