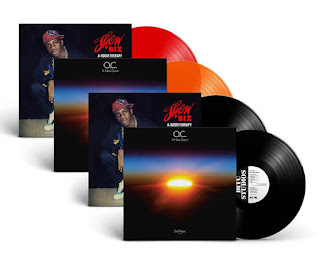 The entire legendary D.I.T.C. posse and the extended Diggin' in the Crates posse gang, has stayed busy from 1988 to 2018 to say the least. Bursting on to the scene with Jazzy Jay and his label, super DJ Diamond D and MC Rob in '88 when they made noise with the single "I'm Not Playin'" which was also the name of the Ultimate Force LP that unfortunately got shelved until 2007  While the album wasn't officially released for almost 10 years it sure as hell made waves and started the D.I.T.C. brand as Jazzy Jay's studio in The Bronx became the go-to-studio for the producers and emcees in the Bronx Area that Jazzy saw potential in. within a couple of years, the Diggin' in the Crates brand was established, building on Lord Finesse's classic "Funky Technician" and Showbiz & AG's "Soul Clap" EP. Diamond, 'Ness, Showbiz & AG was in a couple of years expanded to a full fledged crew including super-talented Big L and OC as well as, produced Bucwild and Fat Joe Da Gangsta. Not to mention semi-related affiliates like Party Arty, D-Flow, AG's brother Wally World, to name a f ew.

D.I.T.C. is probably the one crew that's on the level of Wu-Tang Clan in continuing to release solid projects amd through their The DITCEnt.com Shop you can still grab both free digital albums and physical  vinyl and CD:s. A couple of years back we got the excellent "Mugshot Music" trilogy from Showbiz & AG, "The Diam Piece" by Diamond D,  Lord Finesse's instrumental series and so much more. In other words few crews still goes as hard as the Diggin' in the Crates crew and much of the music is free so don't sleep. Only recently OC dropped the digital but limited "Same Moon, Same Sun" LP via the DITC Store. That project doesn't seem to be available anymore but don't cry over spilled milk because the lyrical phonemona that is Omar Credle has already struck gold again with yet another LP. This one, entitled "A New Dawn", which now be pre-ordered from the site so don't sleep on its February 23 release date. There's both vinyl pressings and CD:s  to grab so hurry up and buy!

As if this wasn't enough Showbiz is also releasinga new project through the site, this one called "A Room Therapy" and officially drops and should actually be out now (although the webstre says Pre-order). The CD goes for 12.99 while LP heads will be forced to pay the somewhat hefty sum of ... About the project it says that it features prodcution by Show, Motif Alumni (who has really shown and prove over the last ew years or so), OC, AG, Tashane Bars, Tashane (R.I.P.), A-Bless, Majestic Gage and Jay Nortey. At the moment there's actually a free digitalal download on the DITCEnt.com page so as they say "Hurry up and buy". The same goes for Show & AG's very overlooked 2017 project "Take It Back" EP which i still upp for free digital download, physical copies and if you want to show at least a little support you can get the LP version rather than the free EP version for only a minimum dollar. D.I.T.C. always move with the times while staying true to their roots!

Yo, and since it's Lord Finesse's birhtday today I think it's only right i'll hit you up with a gem or two of his that's might ne all that well know. Check it out:

Posted by lost.tapes.claaa7@gmail.com at 7:02 PM