The FIRM - What's the verict? 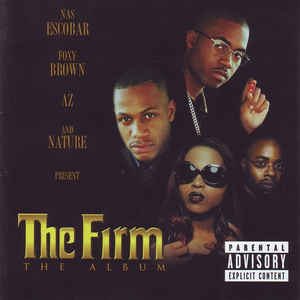 The Firm album had a lot of things working against it at the time of its release. For one thing Hip Hop was just moving into the shiny suit era where popping cristal and living "the good life" was on constantly being flashed. Now granted a mafioso rap record inspired by Martin Scorse and "Scarface" could definitely get away with spending large money on champagne, fine cuisine and poppin' tags. but it was the shiny suit type beats that didn't work at all. Luckily for every "Firm All Stars" or "Fuck Somebody Else" there as a "Firm Fiasco" or a "Desperados". Secondly these were all New York cats, and some of the hottest cats on the streets at that particular moment at that, yet it was released and co-executive produced by Dr. Dre. This is not a knock on Dr. Dre but we all know that he was in between signture sounds from between his Death Row days and what would become his Aftermath/"2001" sound. That's not to say that Dre didn't deliver bangers but this was a point where everything he touched didn't turn to gold. There's excellent Dr. Dre productions on The Firm album, whcih in fact was the first Aftermath LP, such as "Phone Tap", "Firm Fiasco" and "Untouchable" and these is the type of records we wanted an entire The Firm album to sound like - nothng but street shit. Unfortunately that's only about 50% of what we ended up getting.

The other half of the production team and the co-execs were The Trackmaster who had a long standing relationhip with both Nas, AZ and Foxy Brown at this point but would also go on to manage Nature for his debut album on Colombia in 1999. Granted we can't lay the blame on The Good Doctor's doorstep, neither can we lay it at the extended Trackmasters family (Poke, Tone, L.E.S., Curt Gowdy and Dave Atkinson). Because both teams made great music for the project, and both teams made some equally weak music for the projet as well. If anything I think both the pros and cons should be shared equally between all the major players involved (Dre and his production team, The Trackmasters and their production team, Nas, AZ, Foxy and Nature).

What bugs me is that this could've been a true street classic that would be remembered to this day as a great follow-up to "It Was Written", but it just wasn't to be. Let's start with the negatives and build from there - while AZ absolutely murdered all of his verses, Nature did a good job and Foxy was being Foxy, Nas was occassionally phoning it in but to be fair he did have some excellent verses along the way. Second all the skits beside the intro and maybe one more could easily have found its way to the trash can. Biggie started the stupid sex skit on an Hip Hop album, but seriously who the hell want to listen to AZ or Foxy Brown fuck on record? Nature was dope on this LP so I'm not even going to mention the Cormega connection or what could have been as a negative. What I will mention is the several songs that were either delted from the final tracklist or appeared on B-sides or mixtapes and that could have made the LP a whole lot stronger. But we will get to all that later.

The album had the mafiosos concept set up all the way back with "Affirmative Action" ('It Was Written') and "La Familia" ('Ill Na Na') and the album starts of brilliantly in this fashion with the intro, "Firm Fiasco", the excellent "Phone Tap" and "Executive Decisions". This is quickly then derailed with sugar coated BS like "Firm Family", "Firm All Stars" and "Fuck Somebody Else". However for the first four songs we are on our way to a classic album, Dr. Dre really did his thing on "Phone Tap" and "Firm Fiasco" mainly working together with Chris "Glove" Taylor wo's been around since 'The Chronic' days. The drum programming is straight slamming, the guitar melodies and the occassional electric piano chords and female vocalizations make both "Phone Tap" and "Firm Fiasco" nothing short of Dre classics. And while "Firm Fiasco" is a great introduction to the crew by Foxy, Nas and AZ (god damn, did AZ not murder that verse) but it's "Phone Tap" that is the lyrical masterpiece with Nas and AZ going back and forth over a tapped phone, with the two trying to talk through the static without incriminating themeselves. Dr. Dre plays the phone-tapping fed on the hook here,

"Executive Decisions" is the exact type of shit this album should've sounded more like as it's similiar i vibe and style to both "Affirmative Action" and "La Familia". Nas has a sick opening verse and the hook is straight up crack over those lovely strings but it might just be Nature who shines the brightest here. That is until you hear AZ's unbelivable flow that is though. All in all a monster of a record and at this point people had all the expectations in the world that this LP would be solid as hell.

So then we get to "Firm Family", a Dre produced collaboration between Nature and Dre. This isn't actually a bad record, but it's a Dr. Dre record, complete with the West Coast vibe and live instrumenttion by Sean Cruse (guitar), Kamara Kambon (keys), Jerry Moore (flute), Mike Elizondo (bass) and a summer-type cookout vibe interpolation of Sexy Mama by The Moments (1973). Both Nature and Dre does a good job but once again this should never have been on The Firm record. We needed beats like the three preceeding joints, "Affirmative Action" or "East Coast / West Coast Killaz". Oh well, at least it's a decent summer jam.

Well The Trackmasters sure ain't going to be worse for wear in producing something godawful that have absolutely no business on the album. Unlike "Firm Family" which was actually a tight joint on its own, "Firm All Stars" is The Trackmasters getting jiggy with it and though Nas is on the hook the verses comes courtesy of Foxy Brown and her little brother Pretty Boy. They had joints like "Time" and "State Vs. Sosa" and they thought this wa the way to go? What the actual fuck!

"Fuck Somebody Else", another Dre production, another Foxy Brown solo song. I don't know what the hell these guys were thinking here becasuse this is just wack. It's of course an interpolation of "You're Gonna Make Me Love Somebody Else" by the Jones Girls from 1979. This ain't no Firm shit!

"Hardcore" is once again Poke and Tone getting jiggy with it while Esco and Foxy is going back and forth. While the beats are a little to radio friendly circa '97 for my liking I can dig this as Nas and Foxy got bars on here. And speaking of bars the next joint is really an interlude produced by Dr. Dre and Mel-Man called "Untouchable" featuring a verse Nas ghostwrote for Hose of The Bravehearts. Why the fuck didn't thiey give this the song full treatment, it's that ill.

"Five Minutes to Flush" is Nature solo song, and a concept song at that. As Dre was constantly doing around this time he made interpolations of classics (sort of like Puffy but way better) and here he and Glove is remaking "Five Minutes of Funk" into "Five Minutes to Flush". Basically the Feds are at Nature's door and he better make rid of that drugs he got stashed ASAP. I fuck with this cut, it got that slamming Dre funk, the Roger Troutman talkbox, and an excellent take by Nature. But should it have been on this album, that's the question?

"Desperados" on the other hand is vintage Firm shit, produce by Curt Gowdy, Poke and Tone who's guitar driven beat is instantly rewind worthy. The only fault here is that this joint was originally 6 minutes long as proven by the original leak on a DJ Clue tape. On this album version Nas and Foxy Brown's verses are nowhere to be found and as excellent as Canibus' verse is I'm not sure who actually took it between him, AZ and Nature. Now if we can only get perfect CDQ/NO DJ FLAC version of the original version.

Now we have reached the most commercil record on an album that already has too many of them. Even the producers Poke and Tone kind of dissed this record (in fact L.E.S. produced it while Dr. Dre mixed it and added some live instrumentation). The idea was to come out the gate with a commercil single but you had fucking Nas, AZ and Dr. Dre, what you needed was street singles and a a street album. What's funny is that the remix known as the "World Famous" remix and appeared on some versions of the 12" single was so much better on all levels.

Noreaga appears on "I'm Leaving" together with Nature, and brings a lot of that "War Report" style while Poke and Tone does an excellent job with the guitar heavy production and heavy drum programming. Nature's final verse is some heavy shit for sure. AZ and Haf-A-Mill did a lot of heavy records together and "Throw Your Guns" surely does not dissapoint as the album closer in any way shape or form. Drum programming and bass line is knocking and the guitar sample and the occassional cuts makes for an excellent album closer.

But god damn, is this album frustrting or what? It features probably 30 minutes of really dope music with excellent lyrics, strong beats by some of the best producers in the game, coool concepts, but the remaining 25 minutes is hardly what i would think anyone would wanted from a Firm album. And when you take into account that there's at least 20 minutes of unreleased material that never made the final cut it really tells you how dope this LP could have been. Download "Time" produced by Dr. Dre, and featuring Nas, AZ and Nature below as well as the World Famous remix of "Firm All Stars", featuring Mary J. Blige on the hook!