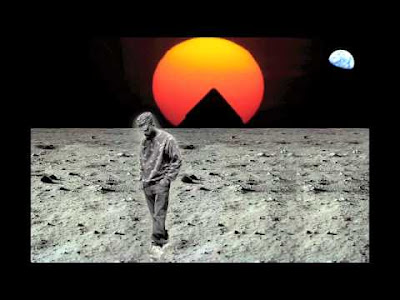 Baatin of Slum Village was one of the most organic emcees to ever grace a 12" single in my opinion - while you sometimes got the impression he was just randomly stringing together words, a deeper analysis of his catalouge reveals a lot of very spiritual themes presented with that incredibly ill smoothed out delivery that has yet to be duplicated by anyone. Unfortunately he faced a lot of problems in his life as his heavy drug use eventually led to the horrible psychic desease that is schizoprenia which alienated from his original Slum Village brethren. Luckily he patched things up with his original group before his untimely and tragic death, contributing heavily to their last album while he was still alive - "Villa Manifesto". I however only recently found out that Baatin had completed an album for the Operation Unknown label somewhere around 2004/2005. Operation Unknown had at the time also signed J Dilla for a one project deal, which was to be the "Jay Love Japan" EP. Dilla's project would include one final collaboration between himself and Baatin, on the funky thumper that is "First Time", the only time a Slum Village member made a cameo on one of Dilla's solo projects.

Baatin's album, titled "TITUS: Chapter 10, Verse 13", was supposed to be the second widely distributed project on the Operation: Unknown label, following "Jay Love Japan". Unfortunately that project sank the whole label due to some extremely shady business dealing which turned the entire situation into a legal nightmare once Dilla passed away. Still to this day "Jay Love Japan" hasn't seen the proper release it deserves, but at least two different versions of it has been made available in some shape or form allowing fans to have it in their collection. Baatin's album, along with other planned releases on the label by artists like Taa'rach and Oh No, didn't get the chance to receive the same treatment. Luckily however DJ Ruckazoid, co-owner of the label, decided to release a 26 minutes sampler of the project for free to the internet.
The sampler seems to feature the majority, if not all, of the recorded album as the songs that have been made available on other releases are included at their full lengths. Usually it wouldn't be hard to tell if tracks are cut short or not but "TITUS" plays out like an eccentric hip hop suite, with musical segments full of atmosphere drops in and out as Baatin uses these excellent beats to drop spiritual teachings and reflections on life. It is an unorthodox hip-hop ride to say the least, and the impromptou vibe and loose compositional structure makes it more reminiscent of free jazz albums of the '70s by the likes of Pharoah Sanders than "Illmatic". The marriage between the music and Baatin's flow and lyrics comes close to perfect and there's never any doubt that you are entirely in Baatin's zone throughout the half hour you spend within these grooves. As such the artwork seen above goes a long way in describing this music. I have a strong feeling that if this LP would have gotten the proper release it deserves it would be discussed as an underground classic today, and I hope that it will be one day freed from the shelf it is currently resting on.

There is no word on the production on the disc but it is obvious that Black Milk was heavily involved in the projects creation. Tracks 1, 2 and 4 has been released elsewhere and are there credited to Milk. The album kicks off with "Eternal", an incredibly tight opener, which was released on Black Milk's solo debut "Sound Of The City" in 2005. This is followed by "Meditate" and "Marvelous" which was released as a double A side single in 2007 on a small Polish label called Asfalt Records. The release featured remixes by local talents associated with label and was most likely mostly pressed up as a vehicle for them, but the inclusion of the original mixes by Black Milk proves that a release of the "Titus" label by another label is a possibility. Listening to the vibe of these records alongside other songs on the LP it's unmistakable that Black Milk was involved on several cuts. It is definitely an album that with its originality and eclectic style demands repeated listens as it constantly grows on the listener. For example the song "Hawe" sees Baatin perform his verses entirely in Hebrew while "Faster Than Your Life" philosophizes on our spiritual journey past this physical life and it's a beautiful thing.

You can stream the 26 minutes album track via YouTube above thanks again to DJ Ruckazoid but I have also uploaded the original Mp3 rip for better quality so you can bump it in whenever or wherever. I also added two tracks from a 12" by producer Noel Zancanella which features exclusive verses by Baatin, as well as two remixes of "Magic" from the Asfalt single. Shouts to UniqueTerror for compiling the tracklist seen below. Spread the word on this incredible release... Rest in power Baatin!