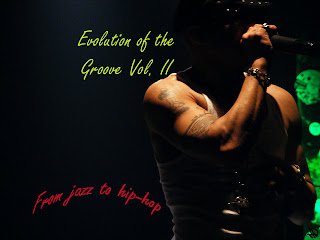 Hip-Hop is what I live and breathe but next to that, jazz is the alternate soundtrack to my life these days. As I said in my article that accompanied the first installment of this series, there's so much similarities between the two. I believe a lot of young people generally have a totally wrong image of what jazz music really is, then and today. Thinking because you heard some old swing records of Louie Armstrong  and the Hot 5; the original vocal jazz movemen is so far from representative of the entire genre. The fact is that just like with any other musical grene, there's a ton of different styles within that sound that are collectively labeled as "jazz". With a lot of records that I put on for people I know, they often get that suprised look resembling a big questionmark in their faces, scratching their head, saying something like "but hey, this isn't no jazz, is it?". Take an album like "In A Silent Way" by Miles Davis, or "Mysterious Traveller" by Weather Report, and to me hip-hop head need to be real closeminded ro nor see the similarities and think that the music is wack; unless he's ready to fully embrace another genre yet.

Jazz has influenced hip-hop artists since the late '80s at least, when groups like Gang Starr, De La Soul, Pete Rock & CL Smooth, Main Source, Easy Mo Bee, A Tribe Called Quest and many more started using samples of jazz, thus creating a fusion of jazz and hip-hop for the first time. Easy Mo Bee who produced an album for Miles Davis, and the late, great innovator GURU took it a step further with the "Jazzmatazz" series. Here he actually invited live jazz artists to perform and solo over hip-hop beats that he rhymed over, and to great effect nontheless. Next in line to push the envelope was the incredible The Roots, who originally started out as a strictly jazz-hip-hop fusion band, with live instruments backing the dope emcees Black Thought and Malik B - an early version of them are featured on this second volume of "Evolution Of The Groove".

The first volume in the series of "Evolution of Groove" got great response from a lot of people when I posted it, and if you liked that I'm positive you will dig this one equally much. Just like last time I put together various track that features at least one respected jazz artist and one respected hip-hop artist, so I avoided hip-hop tracks that simply uses samples from jazz records or jazz records that later would inspire hip-hop artists. There is also gang of original remixes by some of hip-hop's best/producers who respectfully give their take on legendary material by the true jazz greats. Artists featured here are Miles Davis (prodcued by Easy Mo Bee), Branford Marsalis, DJ Premier, Lady of Rage, GURU, Donald Byrd, Ramsey Lewis, Buckwild, The Roots, Steve Coleman, Maceo Parker and De La Soul, Q-Tip, Kenny Garrett and many more. Also I added a track I had no clue existed, a joint from Quincy Jones's 1989 album "Back On The Block" that features Miles blowing his trumpet with verses by Big Daddy Kane and Kool Moe Dee; now that's what I call a monumental line-up for the open minded! The majority of the songs on here are instrumental and are rather awesome, but there's also a few vocal tracks to mix it up good. Enjoy this great shit; hopefully this will make you realize how great jazz can be if you're a non-believer, and I also wanna take this time to recommend Madlib's 'Shades of Blue' remix album and DJ Pete Rock's mixtape 'Diggin on Blue' for that same reason. Enough talk, download, load it on to your mp3 player or whatever you prefer, and press play; this is one of those that works best when listened to from beginning to end as I worked hard on getting the sequencing righr. Enjoy!

'EVOLUTION OF THE GROOVE VOL. II' (FROM JAZZ TO HIP-HOP)
Posted by lost.tapes.claaa7@gmail.com at 2:49 AM