This two vinyl only releases quickly became out-of-print and rarities, which is a shame since they are both straight up incredible. The first one is from Money Bo$$ Players, with their extremely hardcore street'mini album "Ghetto Chronicle Daily". This was back when underrated producer Minnesota handled the majority of the beats and was a full time member of the group, as was brillaint emcee Lord Tariq together with Tray Bag and Eddie Cheeba - all repping the Bronx to the fullest with that gritty New York sound we all love. The extened EP/features no less than seven songs that hold up all the way through and with track titles like "Death Of A Salesman", "Used to Fear Death (But Not Anymore)", etc. it's easy to see why no major label wanted to push this and the group kinda fell into obscurity. This was until two of the original members reunited as the duo Bo$$ Money and in a way became DITC affiliates. Appearing on their compilation "The Movement" besides dropping their rare solo album, "Consignment", which I strongly recommend, They also appeared on pretty much every Sadat X albums between 1996 and 2009 and their work on the UK's The P Brothers album, "The Gas". That album was some of the sickest, releast shit released in 2008. Come to think about it I need to do a proper Bo$$ Money compilation to wake you out of your coma. The "Ghetto Chronicle Daily" rip below is lifted from a white label vinyl press so the sound quality ain't all that but it's definitely worth hearing. All tracks and cuts produced by Minnesota; vocals by Eddie Cheeba, LordTariq and Tray Bag.
M.B.P.'S - "GHETTO CHRONICLE DAILY LP" 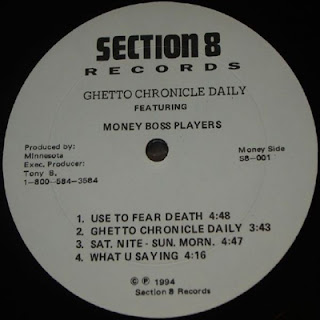 
The second incredible, but sadly forgotten, and by noq is out-of-print. The release I want to focus on is the original Juggaknots album that was released in 1996 on 'Fondle 'Em Records, and if I recall right that was Bobbito's short-lived record label who also put out DOOM's first album. The self-titled mini abum features 9 songs that all hold a very high quality and this was before lady Heroine had joined the group so they were still just a duo with Breezly Breewin and his brother BMS. There's plenty of underground masterpieces on here, such as "Trouble Man" (my favorite which samples an absolutely amazing piece of McCoy Tyners piano solo from John Coltrane's "My Favorite Things"), "Jivetalk", "Clear Blue Skies", fuck it the whole album is great. They re-released the album in 2002 but with 11 additional songs (!!) and the original sequencing switched up so i figured to bring y'all the original debut  release of Juggaknots. All tracs are full, CDQ editions of the elevenn song sounds great and If you're listening to both EP'syou got no less than 60 minutes of classic boombap. Enjoy! 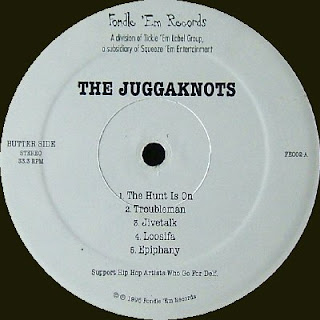