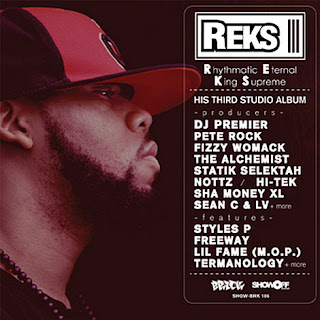 The young emcee who broke through in 2008 with the DJ Premier laced masterpiece "Say Goodnight" and the potent follow-up album "Grey Hairs" is gearing up for the release of his third album. The LP which is called "R.E.K.S. (Rhythmic Eternal King Supreme)" packs a heavy line-up with producers including Preemo reprising his role but also Pete Rock, Lil' Fame, Alchemist, Sean C & LV, Statik Selektah and Hi-Tek and as you should know Reks already proved that he's real disgusting with the wordplay so this will be a heavyhitter that's for sure. One of the tracks that has had my mouth watering is the collaboration with the Soul Brother which I present to y'all below. In case you missed the Premier produced lead single, "The 25th Hour" do yourself a favor and hit play on the YouTube video. "R.E.K.S." drops on Tuesday!