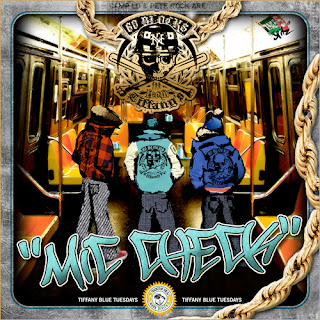 Great news right here that the rhyming duo of Camp Lo is teaming up with the one and only DJ Pete Rock to form a trio that they call 80 Blocks From Tiffany's. I've heard about this project a while back but like so many other promised goodies I was doubtful that it would ever materialize, but with the release of the first single it seems like things hopefully will actually go down. The production on this is really stripped down and raw with a different nod to the old school which I think fits the MC duo perfectly. Maybe with the help of Pete Rock behind the boards they can finally make an album that's a worthy successor to their brilliant '97 debut "Uptown Saturday Night". Also this year could be Pete Rock's finest in a long time as he's got both the above-mentioned album and the collaboration with Smif-N-Wessun and as if that weren't enough he's also supposed to release that long overdue project with DJ Premier before 2011 is over. Also as a bonus Camp Lo/80 Block's From Tiffany's released a track called "Jimmy Page" which is basically a freestyle over the classic Pete Rock & CL Smooth beat for "Straighten It Out" but it even came with a digital cover so maybe they will somehow incorporate it onto the album (which I believe is to be called "Tiffany Blue Tuesdays" btw).
80 Blocks From Tiffany's - "Mic Check"'
80 Blocks From Tiffany's - "Jimmy Page" (Freestyle)
Posted by lost.tapes.claaa7@gmail.com at 2:52 PM