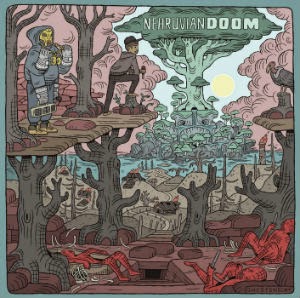 Despite being a huge fan of MF DOOM I can't say I had that high hopes for his collaboration with Nehru Bishop. I wasn't all that familiar with Bishop and the few tracks I had heard didn't exactly kill me. However it was to be released on LEX Records, a record label that always has treated hip-hop records with respect, letting the artists have complete creative control. And with both Nas and MF co-signing this young kid Bishop Nehru, who I believe is only 19 years old on this album, he can't be that bad right? Either way you know I had to check it out as soon as it dropped and I was definitely pleasantly suprised. While Bishop is no virtuos lyricist he's got a pretty cool voice and he's a good writer, touching upon topics that a lot of young people easily can relate too, including young love, loneliness, street stories, maintaining and putting your best in whatever you do.. There's of course also a couple of more typical braggadocio type battle rhhymes which are also welcome, but mainly this is a thematic record focusing on the lifes and times of Bishop Nehru set over the one-of-a-kind soundscapes of Metal Fingerz. Listening to this, there's no question that the combination between DOOM and Bishop are actually a brilliant combination, and there's no song on here I would skip.  DOOM himself has a bunch of verses as well, about three or four that are all classic Metal Fingerz ish, and one of the most interesting things of all is the inclusion of a new Madvillain joint if you will. Madlib produces the final song "Disastrous" where both NehruvianDOOM members goes in.

"NehruvianDOOM" starts off in typical DOOM fashion with a low-key beat with a muffled guitar and bass melody, a hypnotic female vocal sample and tight drum programming. Over this the Villain places his classic audio excerpts of weirdness from various films and TV-shows that all together really sets off the piece lovely. An audio excerpt on meditation segues right into the first single, "OM", which is classic DOOM all the way. Contrasting the laidback intro it's a powerhouse performance by both MF and Bishop set over a high-energy beat based around two different keyboard samples (one of them being an electric organ). Another of my favorite joints is the jazz-infused "Mean The Most" where Bishop gives a beautiful dedication to that special girl while MF DOOM prepares an extraordinary beat that's heavily influenced by jazz music, yet done in such a way as only the Villain can. With a heavy bass and a repeating trombone hook, various percussive instruments and smacking drums, With an addictive beat like this Bishop is given a perfect platform to express his love - "I still think about being with a being of your caliber/ You hold your own down/ My queen with a gold crown/ Your leaving the whole town astounded". The jazz element is strong on this mini album, and no one does jazzy hip-hop like DOOM because he uses the sampled instruments in such an unorthodox and unexpected way. There's a number of small musical interludes tying the songs together (man I love that), including the outro to "Casket" which features booming drum programming underlining a hypnotic accoustic jazz piano sampled from a classic early number by Miles Davis and Charlie Parker. As a vocal album this is probably one of the most interesting pieces of DOOM productions I've heard in several years - there's so many different sounds and combinations of instruments that it never get the least repetitive despite the sound always being 100 percent Metal Fingerz. The music in itself is experimental, crafting beats from a wide range of different and rare sources, but the pairing of NehruvianDOOM is quite epxerimental in itself as Bishop isn't the type of emcee you'd expect to hear an entire album together with MF with. But that's the beauty of it, Bishop's style is realatively scaled down, simple or rather straight forward if you willl while the beats are way out there, and it's exactly that contrast that makes it work so beautifully,

I'm not that familiar with the "Special Hebs" series and I'm not sure whether or not the production on this is all new beats or lifted from the aforementioned volumes, but to my ears everything on here are brand new beats. Clocking in at just over thirty minutes I've found this to be an extremely rewind worthy LP and the chemistry displayed between the emcee and producer makes me fiend for another project from these two gentlemen. It's by no means a perfect record though, I have a feeling that Bishop is not fully molded as an emcee but he got a dope voice and plenty of sick, if simple, lines. Another thing that bugs me is with such a short running time and a total track number of 9 songs, iTunes customers actually get an extra song. That track, "They Say Bishy Bish", is hardly a throwaway  cut either although it's not as strong as the rest of the material but it would be a decent bonus cut to have on the physical copies as well. Overall the debut offering from NehruvianDOOM is an interesting album , that though not mindblowing is a great front-to-back listen created by two different artists with a great chemistry.
Posted by lost.tapes.claaa7@gmail.com at 8:18 AM