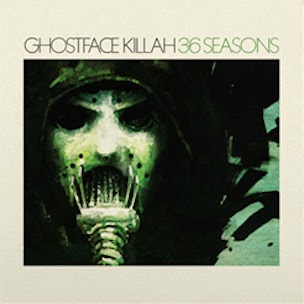 There's no question in my mind anymore that Ghostface Killah isn't one of the absolutely greatest emcees alive. The criteria for that for me is a guy who has a rhyme style that has inspired loads of others emcees styles, is mad charismatic, has something that sets him apart like being a great storyteller, is great at picking beats, has a flow and delivery out of this world annd last but definitely not least their catalouge. Ghost without a doubt fills all that criteria without a doubt, and with each album he has released I'm constantly amazed that he managed to do it again. Sure there were "Bulletproof Wallets", but if you listen to the "original" version of that album you'll realize it's pretty much a lost classic.

On December 9, The Masked Assassin returned with his tenth solo album (not counting Wu-Tang Clan, Theodore Unit projects, etc - damn this guy is hardworking), "36 Seasons". It is somewhat of a spiritual successor to his colaboration with Adrian Younge ("12 Reasons to Die") which I labeled as the best album of 2013 with its immaculate production that mixed the vibes spagetthi western soundtracks by Ennio Morricone and vintage RZA productions with a well-crafted story from Ghost that ran throughout the whole album. And just like that album, "36 Seasons", got a lot of similarities right off the bat. Tony Starks brings out another strong concept album with a sonic tour de force of ghetto life, set over nothing but live instrumentation. There's a lot of differences between the two albums as well though, but in a way it does feel like a spiritual successor. And what's even iller is that this will be sort of a unconnected trilogy as Ghost is currently working with the great jazz trio BadBadNotGood in the creation of an album called "Sour Soul", set for early 2015. It's easy to see that the once masked Wu-Tang member is willing to take a lot more risk once he went independent and left Def Jam.

"36 Seasons" is a very pleasant suprise, and one of Ghost's most coherrent projects in many years, and the main reasons for that is the story that runs throughout the entire album as well as the soulful backdrops produced and performed by the superb The Revelations. The live band, consisting of bassist Josh Werner, Wes Mingus on guitar, Borahm Lee on keys, drummer Gintas Janusonis, and vocalists Tre Williams and Rell, has already made contributions to two Wu-Tang compilations ("Legendary Weapons", "Chamber Music"), a remix album by Cormega, and several projects under their own name. I think their work with Ghostface here might be their finest and most refined work yet. As Starks always been a soulman, creating incredible hip-hop from classics by the likes of Delphonics, The Sylvers, Willie Hutch, and Otis Redding, The Revelations has long been terrific at playing soul with a hip-hop vibe, as evident by songs like their rendition of "I Forgot to be Your Lover" on "The Man With The Iron Fists" and their solo projects with Tre Williams and Rell. For Ghost they cook up a batch of tracks that packs plenty of that '70s soul shit, yet always infused with a raw hip-hop beat - agressive guitar, Rhodes, hard drums, and melodic basslines forms the center of this experience on a strictly musical level. The main thing is that it always sounds like a Ghostface record, even on the two songs that our main artist isn't even featured, and having worked with The Wu before The Revelations has really found their way into the Wu sound.

The story as plotted out here by GFK is the variation of a quite simple ghetto story that's been told many times before in both movies and on rap songs, but there's a bunch of interesting twists and turns in the story that keeps the listener on his toes throughout. Every guest apperance is focused and has a meaning, and every guest emcee and singer fills a purpose in playing a role in the story. I'm not gonna break down the entire narrative, but a quick overlook reveals that Ghostface plays a former hood star that's been on iron vacation for nine years and come backs to his neighborhood only to find that a new boss, played by Kool G Rap, has taken over the block and is involved in a lot of foul play like selling drugs to kids. Ghost's childhood friend, played by AZ, is now a crooked cop playing both sides of the fence, who still looks out for Starks. Other supporting players include Pharoahe Monch as somewhat of a mad scientist, Shawn Wigs and NEMS as members of Ghost and G Rap's posses, respectively, and singer Rell. In other words it's very much put together like a movie, both with the cinematic score, the main star, a supporting cast, a action-packed narrative and even the romantic interlude of the incredible The Revelations solo track "It's A Thin Line" that chills things down for a moment.

Ghost has always been revered as one of the greatest story tellers of rap, so it's extremely interesting to see him take on an entire concept album based on one idea, and he does so with energy and verses that always comes off as gripping. However as he is constantly tied to follow the narrative, you miss the old Starks that dropped verses filled with more slang than is humanily comprehensible. He's constantly solid though, although the best verses on the album undoubtedly belong to AZ who not only has the most interesting role but attacks it with such raw intensity, mad flows and unbelivably well written verses. Whenever "Doe Or Die II" finally drops, the rap game should definitely take cover. Talking about specific songs seems redudant as this undoubtedly is a project you listen to from start to finnish, but I do want to mention the agressive opening track "The Battlefield" which sets up the story by introducing each of its three major players - having AZ, Kool G Rap and Ghostface Killah on a concept track.. And on a ridiciously raw beat nontheless? Forget about it!

Undoubtedly one of the best albums of the year, and Ghostface continues to be the reigning champ of hip-hop catalouges. Salute!
Posted by lost.tapes.claaa7@gmail.com at 4:45 AM