This was actually released a couple of weeks back but I haven't gotten around to listen to it until now and totally forgot to post about it. Strictly a digital release, Hell Razah's latest album is entitled "Gates of Hell" and packs a mean punch of fourteen tracks of straight, uncut dope. There's a lot of vintage soul samples, bumping rhythm tracks, high pitched vocal hooks, and a whole lot of knowledge delivered in Razah's usual clear cut vocab. With a guest apperance by Sadat X on "Contribution X" a long with strong cuts such as "Falling Down", "Dead Poets", "Godflesh" (the single streaming above) and "The Crucifixion" this is a suprisingly strong album that I strongly recommended. Clocking it at just over thirty minutes, it's a short but powerful listen filled with clever rhymes with an important message.  I wonder whether this is newly recorded music or if this was recorded before Razah's medical problems. Either way he sounds on fire all the way through - on first listen I'd say this is one of his strongest projects yet, most definitely. Unfortunately no stream is available, but it's definitely worth the purchase from iTunes. 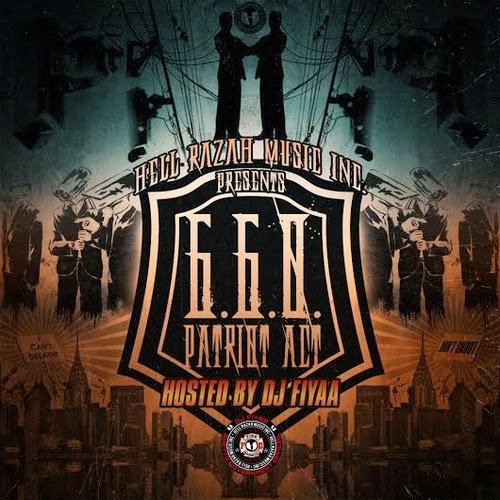 For those who might have missed it Heaven Razah also recently dropped a free mixtape in anticipation of "Gates Of Hell". Called "Patriot Act" the DJ Fiyaa hosted mix is made up of sixteen hard hitting tracks that are mostly either previously unreleased or brand new. Big up to Razah for keeping real music alive. Tune in, turn it on and TURN IT UP!!

Download Mixtape | Free Mixtapes Powered by DatPiff.com
Posted by lost.tapes.claaa7@gmail.com at 8:57 AM