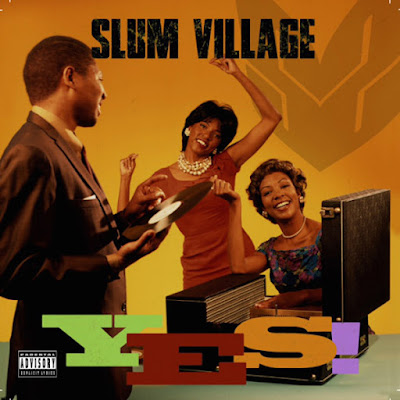 By 2015 there's been a lot of posthumous releases celebrating the music of the late great J Dilla. The early projects like "The Shining", "Dillagence" and "Jay Stay Paid" were done with a lot of respect for the artist and stood on their own pretty much as well as any other official Jay Dee releases, However projects like "Return Of The Detroit", "The Lost Scrolls" EP and Yancey Boys' "Sunset Blvd." felt thrown together and really uninspired, using throwaway beats that I doubt Dilla would never have approved of being released, and I was beginning to feel that I really didn't want any more posthumous Dilla releases beside the still unreleased albums like the MCA 2002 vocal LP. Therefore I was extremely positively suprised by Slum Village's latest album "YES!". The bulk of the album features original production by Jay Dee dating back to the mid-'90s, which has then been built on and mixed by Young RJ to make them sound a little more current. Young RJ studied under Jay Dee since the early Slum days, and they have a few tracks they produced together, so as he said in an interview he felt he knew exactly what Dilla wanted with the beats they had. Being that many of the beats come from old cassettes the album has a real grimey feel, though with RJ's touch up it never sounds weird or like they had to make a compromise in any way - just like they set out to do a real grimey, throwback joint.

Production is absolutely excellent throughout, creating a real nostalgic album as SV hasn't released an album as close to in sound to the "Fan-Tas-Tic" volumes (which still stands as SV's illest projects). It also has loads of verses by Baatin which is very welcome as him and T3 always had a cool chemistry together. Now, don't get me wrong "YES!" is far from only being some nostalgic thrown together mixtape type of album. It's an album for the fans that according to interviews with T3 and Young RJ might be the final album in the Slum catalouge and as such it's a marvelous way to come full circle and close the chapter. There's not a single weak song here, there's no beats that I'm at all familiar with since before and the Jay Dee beats used are actually tracks he created with SV in mind - a song like "Yes Yes" was something they all worked together on for "Fantastic Vol. 2" but they couldn't come up with a hook at the time so they scrapped it. Baatin and T3 does a great job riding the thumping, heavily filtered soul bangers here and the guests like Jon Connor, Dwele, Illa J, De La Soul, Phife Dawg and the verses from Young RJ are all in the family which is definitely a great thing.

There's a minimum of songs on here that doesn't stand among straight up incredible headnodders, if any. "Windows" "Push it Along" with Phife, "Right Back" with De La Soul, "Tear It Down", "Love is.../Fantastic", and the bonus track "Just Like A Test" are all stand outs though this is definitely an album that should be played from front-to-back, and it's clocking in at only 40 minutes at that. Jay Dee's trademark sound is all over this, the somewhat unsyncopated drum programming, the beautiful bass melodies, heavy filters, and melodic Rhodes and acoustic piano melodies, and so on. The only thing that feels like it's missing and would have improved the LP is if the group could have patched things up with eLzhi to at least get a couple of verse from him at least. For me, with every SV release from "Trinity" to "Villa Manifesto" his verses has always been what I've looked forward to the most hearing the most. Still with an LP that is so well put together I have to say that it works really well either way and like I put in earlier it really puts any previous posthumous J Dilla release post-2009 to shame.


The only track not produced by Jay Dee and Young RJ are "We On" laced by Black Milk which still bangs very hard and works well in the context given the amount of material Black Milk has produced for the group throughout the years. The song was actually originally solo song by Baatin that was never finished before 'Tin's untimely passing, which has been completed with added verses by Slum Village for the LP. It's an interesting idea that is well executed, as what T3 and Young RJ has set out to do is bring together the sound of the Slum Village from then til' now. This is an interesting way to make a posthumous release which only would work in this context - a group that all worked together many times in life and making a last album together for a group that has gone through so many changes really takes things full circle. The LP is full of moments like this, songs sounding like they were actually created in the studio together by all involved rather than two deceased artists and two livign ones piezing together a full-length for 2015. An interesting tidbit is that the cover used was originally the decided cover to use for "Fantastic Vol. 2" until they decided to change it a the last minute. Compared to dissapointments like "Evolution" this album is pure classic Slum Village sound and if they decide to close it out on this joint, they are definitely closing out at the top of their game. To be honest, I'd definitely rank this amongst the quartet's finest releases ever. Be sure to don't sleep on this gem! Matter of fact be sure to head over to UGHH and order the album in your choice of LP or CD.
Posted by lost.tapes.claaa7@gmail.com at 10:40 PM