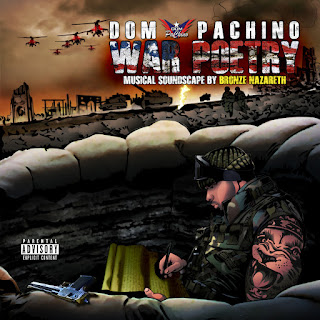 Bronze Nazareth can be quite hit or miss to me, I know he's considered the second coming of RZA which I Think is just nuts but there's definitely no denying that he often can Cook up very dope beats and when the emcee is right magic can happen - especially as he is steadily getting better. His full-length collaborations with Willie The Kid ("Living Daylights"), Canibus ("Time Flies...Life Dies") and now Killarmy's Dom Pachino with "War Poetry".
Killarmy has always been a very interesting group to me, but to be honest I never cared at all for them lyrically save for Killa Sin, Dom Pachino a.k.a. PR Terrorist and the ocassional Shogun Assasson verse but those members apperances together with the immaculate 4th Disciple productions have allowed them to come out with several classic tracks and even incredible front-to-back albums. And as I stated Dom Pachino is one of the few emcees out the crew that I Think can hold down a solo album by himself so you can bet I was hyped for this when the first singles and info broke. Now the album is here and it does not dissapoint - what with guest apperances from Killa Sin (possibly the last we'll ever hear from him), Prodigal Sunn, Leatha Fase, Shyheim, Timbo King, Sav Killz, Pop Da Brown Hornet, Shogun Assasson, C-Rayz Walz, Termanology and even a bonus production by 4th Disciple himself... And a scorching Cilvaringz diss track in "Haunted Dreams". For any fans of Wu-Tang, Bronze Nazareth, Killarmy, this is an obvious must hear. Unfortunately the small amount of limited CD runs is already gone so the album is only available in digital format, which you can stream in its entirety over at Dom's Bandcamp so be sure to give it a go and support the real! BANG BANG!

Posted by lost.tapes.claaa7@gmail.com at 8:48 AM